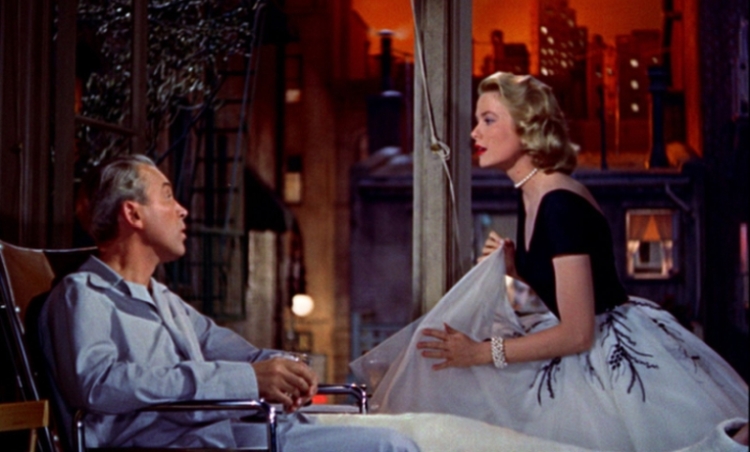 
Hitchcock once said to fellow filmmaker Francois Truffaut: "I'll bet you that nine out of ten people, if they see a woman across the courtyard undressing for bed, or even a man puttering around in his room, will stay and look; no one turns away and says, 'It's none of my business.' They could pull down their blinds, but they never do; they stand there and look out." I'm sure Hitchcock counts himself in that number, given the recurring theme of voyeurism in much of his work. I count myself in that number as well. I've lived in rural areas most of my life, so I've never had an opportunity to scale some tree outside an attractive woman's bedroom window and quietly fap in the night. Maybe someday that opportunity to bareback a branch will present itself, but I'll admit to receiving a voyeuristic thrill from neighborhood cruises when strangers have yet to draw their curtains in the darkening dusk. I catch a glimpse of a family gathered in the kitchen or the living room and I think to myself, "I'm going to murder them!" "What is their story? Who are they? What do they do? Are they going through good times or bad?" Most likely their lives are as unspectacular as my own, yet the intrigue remains.

No wonder then that I find the "window-shopping" to be the most fascinating component of Rear Window, and on re-watches I find myself looking past Stewart and Kelly to study that living, breathing backdrop. Each apartment is essentially a short film in itself, self-contained with occasional overlap between others in its shared universe. Each window -- or "screen," so to speak -- represents a different genre. Miss Hearing Aid is our slice-of-life drama; the newlyweds equal romance; Miss Lonelyhearts, a tragedy; the songwriter: musical; Miss Torso: erotica; the couple who sleep on the fire escape is our stand-in for comedy; and the central figure of the did-he-or-didn't-he, Lars Thorwald, symbolizes mystery/suspense. Despite being filmed from a distance and possessing little to no dialogue, the neighbors feel more realistic than the primary characters in some films. I particularly love the character arc for Miss Lonelyhearts, who progresses from entertaining imaginary suitors, to mustering the courage to visit the bar across the street only to be assaulted by a horny young man, to nearly attempting suicide, to eventually finding companionship with the aspiring songwriter, whose music has brought purpose to her life while also serving as our diegetic soundtrack.

Not only do the neighbors represent various genres, they also represent various stages of a relationship. There's the dating scene for Miss Torso; the honeymoon phase of the newlyweds; boring domesticity of the couple with the dog; and inevitable divorce with the Thorwalds. That multifunctional symbolism is integral to the film's initial conflict: should Jefferies break it off with Lisa or take their relationship to the next level? The notion that "any man with half a brain who can get one eye open" would even contemplate breaking up with Grace Kelly is preposterous, but the dilemma makes sense within the realm of the film, as Jeff has convinced himself that Lisa isn't cut out for his rough-and-tumble lifestyle. "She's too perfect, she's too talented, she's too beautiful, she's too sophisticated, she's too everything but what I want." What he wants is to not end up like the people outside his window, "rushing home to a hot apartment to listen to the automatic laundry, and the electric dishwasher, and the garbage disposal, and the nagging wife.” Ironically, the dismemberment of Thorwald's wife saves Jeff from foolishly pulling apart the seams of his own relationship. Jeff and Lisa's shared obsession with solving the suspicious disappearance of Mrs. Thorwald strengthens their bond, causing them to forget about their quarrels. When Lisa returns from slipping the letter underneath Thorwald's apartment door, having put herself in danger for the pursuit of truth, a close-up captures the lovestruck expression on Stewart's face. In that moment it finally dawns on him -- Lisa Carol Fremont is the one.

As Thelma Ritter's character, the nurse named Stella, observes in Rear Window, "We've become a race of peeping toms," and it's truer today than it was back then. Our primary source of entertainment is spying on the lives of others through those digital windows called televisions and computers. Hitchcock exploits that voyeuristic relationship to masterful effect, crafting a movie about the nature of movie-watching and disguising it as a classic murder mystery. During the opening credits, the blinds slowly rise like the curtain in a theater, unveiling the window that will serve as our movie screen. Jeff is both audience and director, his binoculars the camera lens, watching and "filming" the oblivious characters across the courtyard. When Lisa crosses the invisible barrier between passive spectator and active participant, scaling the fire escape to enter Thorwald's apartment, we fear for her well-being while cheering her boldness, as we hypocritically do when any character puts themselves in danger for the purpose of thrilling us. Jeff is as helpless to intervene as we are from our living rooms, his range of emotions during that scene mirroring our own: trepidation, fear, guilt, relief, vindication. When authorities arrive, we mistakenly think that the threat has been extinguished, only to suffer a moment of intense disconcertment when the antagonist notices our presence. Fourth wall broken, safety bubble burst. Within minutes the villain has penetrated the other side of the camera, standing in our doorway with malicious intent. Sometimes the content in movies follows us home, just as there are repercussions to prying into the lives of others.

I'm astonished by the degree of detail in every frame of Rear Window, as well as the level of precision/planning it must have required to capture the synchronicity of so many moving parts. Neighbors acting from afar, traffic passing along the street, kids playing hopscotch on the sidewalk, patrons drinking and socializing in the bar across from the apartment. Hitchcock essentially directed several short films in conjunction with a feature. The script is equally phenomenal. For all its thrills, this is quite a humorous film. (Besides the wealth of witty remarks, I also get a laugh from the expectation-subverting reveal of Miss Torso's man, who resembles Rick Moranis.) James Stewart was perfectly cast. I can scarcely think of another actor who would've possessed the cache of goodwill and natural charm required to remain sympathetic to audiences despite his character being a massive peeping tom. The camera, with the exception of a couple brief shots, never leaves the perspective of Jeff's apartment, yet unlike most one-setting films, the camerawork never feels restricted or confined. Add the multi-layered subtext so rife for analysis to Hitchcock's expert audience manipulation and his knack for maximizing suspense, and Rear Window might be his most impressive work.

The Ballad of Miss Lonelyhearts. Candlelight dinner, two glasses of wine, Bing Crosby on the radio. She pretends someone is at the door, invites them in, accepts a kiss on the cheek . . . raises her glass, takes a sip, then buries her face in her arms as her imagination crumples under the weight of her mounting loneliness. It's quite possibly the most invasive moment in the film, the type of emotional vulnerability we only express when alone -- otherwise we'd die of embarrassment. James Stewart's facial expressions throughout that scene are golden as well, and I particularly love the charming moment when he raises his glass to her in a synchronized toast.

“We’ve become a race of peeping toms. What people ought to do is get outside their own house and look in for a change. Yes, sir. How’s that for a bit of homespun philosophy?”
“‘Readers Digest,’ April 1939"
“Well, I only quote from the best.”

“She’s like a queen bee with her pick of the drones.”
“I’d say she’s doing a woman’s hardest job: juggling wolves.”

“Where’s that wonderful music coming from?”
“Some songwriter over there in the studio apartment. He lives alone. Probably had a very unhappy marriage.”
“Oh, it’s enchanting. It’s almost like it were being written especially for us.”
“No wonder he’s having so much trouble with it.”

“Lisa, in this job you carry one suitcase. Your home is the available transportation. You don’t sleep very much, you bathe less. And sometimes the food that you eat is made from things you couldn’t even look at when they’re alive.”
“Jeff, you don’t have to be deliberately repulsive just to impress me I’m wrong.”
“Deliberately repulsive? I’m just trying to make it sound good.”

“She sure is the 'eat, drink and be merry girl.'”
“Yeah, she’ll wind up fat, alcoholic and miserable.”

“Why would a man leave his apartment three times on a rainy night with a suitcase and come back three times?”
“He likes the way his wife welcomes him home.”

“Where does a man get inspiration to write a song like that?”
“Well, he gets it from the landlady once a month.”

“Nobody ever invented a polite word for a killing yet.”

“Let’s go down and find out what’s buried in the garden.”
“Why not? I always wanted to meet Mrs. Thorwald.” 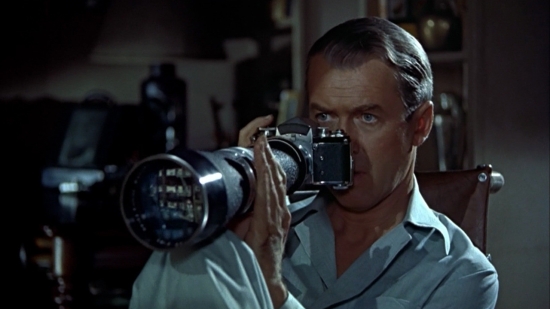 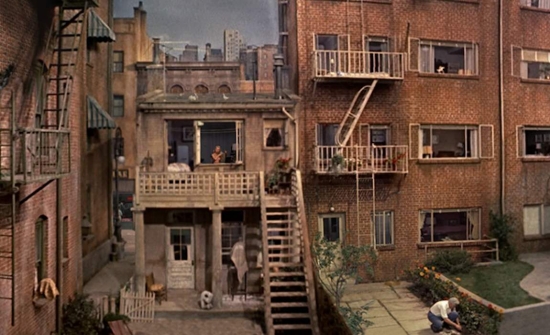 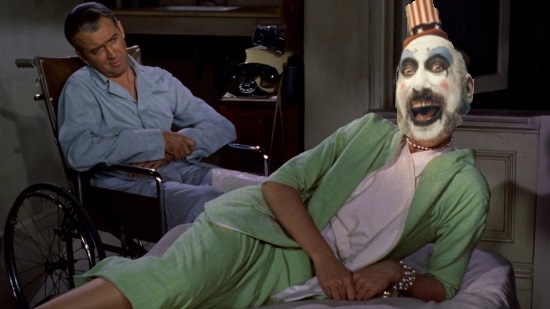