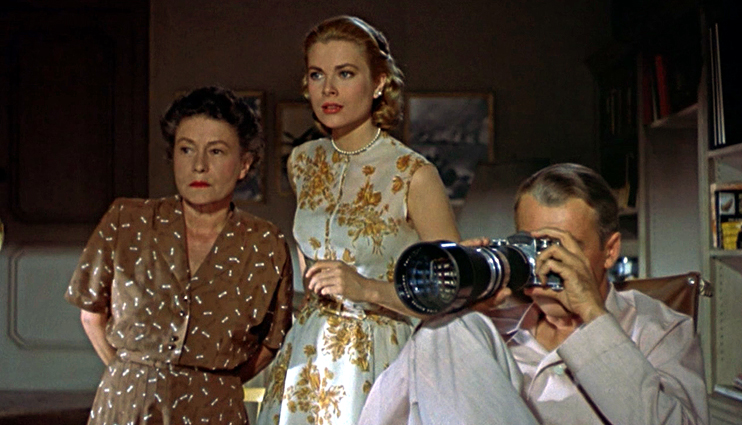 About: James Stewart is a photographer with a broken leg who's stuck in a wheelchair in his apartment during a sweltering summer heat wave. He passes his spare time by spying on his neighbors, watching their lives through the rear windows of their apartments that faces his. Suddenly he becomes convinced he's discovered evidence of a murder, when he spots strange things happening in one of the apartments. His high society girlfriend thinks he's lost his marbles, so does his insurance helper, Thelma Ritter. 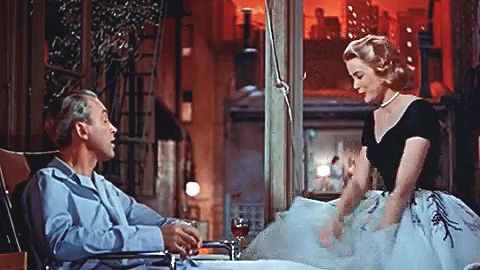 Review: This was the second time I've seen Rear Window and I had forgotten everything about it, so I'm glad this was on the Hitch watch list.

My favorite scene was the establishing shot starting in the apartment - with the window blinds up, then the blinds go down - the camera then zooms out the window, peeping into the lives of the other apartment's rear windows...finally the camera comes back in and we see it's hot! Stewart is sweating bullets! and the mercury in the thermometer is rising, really rising! Then we see Stewart frantically trying to itch his leg in the cast, brilliant!

That's very well done, as it gives us the feeling of what it's like to be trapped in an apartment, stuck in a wheel chair, bored as hell, while sweltering in the heat...This then drives the story forward and sets the tone for the movie. Which tells us that being a peeping-tom voyeur is not a healthy hobby!

James Stewart is perfect in this role. He's one of my all time favorite actors and is well cast here. And big kudos to a great actress, Thelma Ritter. I loved the scene they shared together at the start of the movie. This is when we learn of Stewart's philosophy on marriage and life. It's a very well written script too. And I just got through watching a short interview with the script writer John Michael Hayes, which was very insightful.

I liked Grace Kelly in this. She's better here than in Dial M for Murder. Even the scriptwriter John Michael Hayes, said she was stiff in Dial M. She's certainly pretty and very fashionable too, just look at those photos! I'd say her best quality is her classy, poise. However she was my least favorite of the actors.

I'm not a fan of Hitch's trick photography, like the glowing effect of the camera's flash bulb, I think it takes away from the rest of the film's brilliance. Hitch is the master of entertainment films, but the more I watch and rewatch his films, I realize they were the blockbuster CG movies of his day, but with Hitch it's the skill that he puts into his direction, that makes his films memorable.