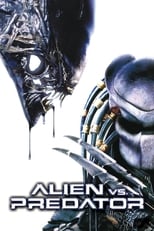 Release: Aug. 12th, 2004
Runtime: 1 hour, 41 minutes
When scientists discover something in the Arctic that appears to be a buried Pyramid, they send a research team out to investigate. Little do they know that they are about to step into a hunting ground where Aliens are grown as sport for the Predator race.

We didn't find any linked discussions for this film. Here are the results of a quick search of possibly related threads:
149 Alien Vs. Predator
Here is the first artwork and the film's logo (as it stands) ........
0 Alien vs. Predator
Check out the website. I can't believe they're actually finally doing it! I had heard rumors, but now it's all true! Be sure to watch the trailer if you want to... doesn't really show much....
27 Alien Vs Predator 2
Visual effects artists and commercial and music video directors Greg & Colin Strause have been mentioned as possible directors (via IGN)for Alien vs. Predator 2, the forthcoming sequel to 2004's A...
0 Alien vs. Predator
I was skimming the web for movie scripts the other day and i stumbled apon a website with a few scripts for movies that havent even com e out yet. so made a few links to them and put them on my webs...
6 New Alien vs. Predator Trailer
The new alien vs. predator trailer gives you a better look at the movie than the other ones. Check it out here: ...

The Rodent Which is pretty much all the film is from then on after: Alien Vs Predator.
READ REVIEW

Yoda The star of the film are not the Aliens, nor the Predators, but the fight itself, which spans about half the movie and includes two significant bouts.
READ REVIEW