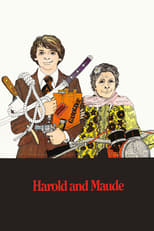 Release: Dec. 20th, 1971
Runtime: 1 hour, 31 minutes
The young Harold lives in his own world of suicide-attempts and funeral visits to avoid the misery of his current family and home environment. Harold meets an 80-year-old woman named Maude who also lives in her own world yet one in which she is having the time of her life. When the two opposites meet they realize that their differences don’t matter and they become best friends and love each other.

Citizen Rules I did not object to the story idea of an 80 year old woman having a romance with a 20 year old kid, (though he looks more like 14.) I actually liked the story idea, it had a lot of potential.
READ REVIEW

Omnizoa I like how the two contrast and complement each other in their various ways, Maude to Harold moreso than Harold to Maude though, that would be a criticism of mine.
READ REVIEW

Roy C. The age gap between Harold and Maude is over 50 years, which is even more peculiar.
READ REVIEW