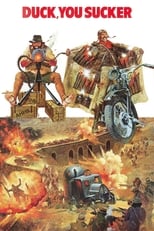 Release: Oct. 20th, 1971
Runtime: 2 hours, 37 minutes
At the beginning of the 1913 Mexican Revolution, greedy bandit Juan Miranda and idealist John H. Mallory, an Irish Republican Army explosives expert on the lam from the British, fall in with a band of revolutionaries plotting to strike a national bank. When it turns out that the government has been using the bank as a hiding place for illegally detained political prisoners -- who are freed by the blast -- Miranda becomes a revolutionary hero...

We didn't find any linked discussions for this film. Here are the results of a quick search of possibly related threads:
23 Sucker Punch
Zack Snyder just made his 1941. Well it still had 30-40 minutes worth of great special effect laden fight scenes, but the story and acting in this rock video resembling a movie extravaganza ...
75 Sucker Punch
Directed by: Zack Snyder Cast: Carla Gugino, Jena Malone, Vanessa Hudgens, Michael Jai White, Jon Hamm, Abbie Cornish Plot: Sucker Punch is a movie about little girl who is trying to hide from t...
20 Is Howard The Duck really all that foul or bad?
I just need to know if you can analyze the badness of the film on what made the film bad! Please i would like to know. Why did it flopped? and why did George Lucas disowned it? Can you compare t...
4 Howard the Duck Special Edition DVD
STREET DATE : March 10, 2009 S.R.P.: $14.98 AUDIO: • English Dolby Digital 5.1 Surround • French Dolby Digital 2.0 Stereo • Spanish Dolby Digital 2.0 Stereo SUBTITLES: • En...
4 Does anybody want to see a Howard The Duck movie with Seth Green?
What's interesting about the Guardians Of The Galaxy movies is that in both of them, Howard The Duck has made a cameo. He hadn't been brought back to the screen in almost 30 years. And I think we all ...

pahaK Duck, You Sucker is clearly an attempt to move away from Leone's traditional western style but the transition to more modern world doesn't work and the result is an awkward pseudo-western that, despite Leone's claims, feels overtly political (especially the depiction of violence - we see revolutioni....
READ REVIEW

Iroquois It's not hard to think of the belligerence that Steiger and Coburn share with one another during their journey together is like any of the uneasy alliances that form between characters in any of Leone's previous films, most obviously that which formed between Eli Wallach and Clint Eastwood in The Go....
READ REVIEW