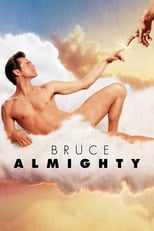 Release: May 23rd, 2003
Runtime: 1 hour, 41 minutes
Bruce Nolan toils as a 'human interest' television reporter in Buffalo, N.Y., but despite his high ratings and the love of his beautiful girlfriend, Bruce remains unfulfilled. At the end of the worst day in his life, he angrily ridicules God—and the Almighty responds, endowing Bruce with all of His divine powers.

We didn't find any linked discussions for this film. Here are the results of a quick search of possibly related threads:
17 Bruce Almighty
I heard about this one a month or two ago...I really like the sound of it. Freeman & Aniston Join "Bruce Almighty" ...
37 Bruce Almighty
I wanted this to be good in the worst way. An apology for having to sit through The Majestic, if you will. And it succeeds for a little while. Jim Carrey is his usual spastic self, and the laughs k...
21 Bruce Almighty
This is my first time posting on this board so forgive me if i do anything not up to par. I havent seen a Bruce ALmighty form so i opened up this thread. I recently saw Bruce Almighty and I though...
2 Bruce Almighty Song Question
Does anyone know the name of the song played when Bruce Almighty is running with milk and after he states "Cue cheesy Inspriational music" What is the name of that cheesy Inspriational music...
5 Bruce Almighty - Incredible YAHOO-Startsound
Hey people!... Everybody who watched the famous movie called "Bruce Almighty" like and loved it very much! My question is: you know, Bruce started to archive his prayers on a computer ...