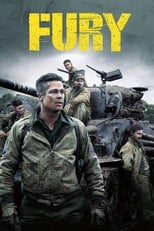 Release: Oct. 17th, 2014
Runtime: 2 hours, 15 minutes
Last months of World War II in April 1945. As the Allies make their final push in the European Theater, a battle-hardened U.S. Army sergeant in the 2nd Armored Division named Wardaddy commands a Sherman tank called "Fury" and its five-man crew on a deadly mission behind enemy lines. Outnumbered and outgunned, Wardaddy and his men face overwhelming odds in their heroic attempts to strike at the heart of Nazi Germany.

Citizen Rules Out of a tank pops the hero, Brad Pitt locked in hand to hand combat with a German soldier.
READ REVIEW

Daniel M The film lacks (almost) any kind of morality or human balance that make the most powerful war pieces so fascinating and aside from Logan Lerman's young character, each other member of the tank 'Fury' are lazily constructed caricatures that give you no reason to empathise or feel any kind of emotion towards, in fact, for most of the part they are quite despicable.
READ REVIEW

NO RATING
skizzerflake In Fury, Brad Pitt is Wardaddy a tough veteran captain of a tank crew that has survived North Africa and D-Day and fought its way far into Germany.
READ REVIEW
View All (6)