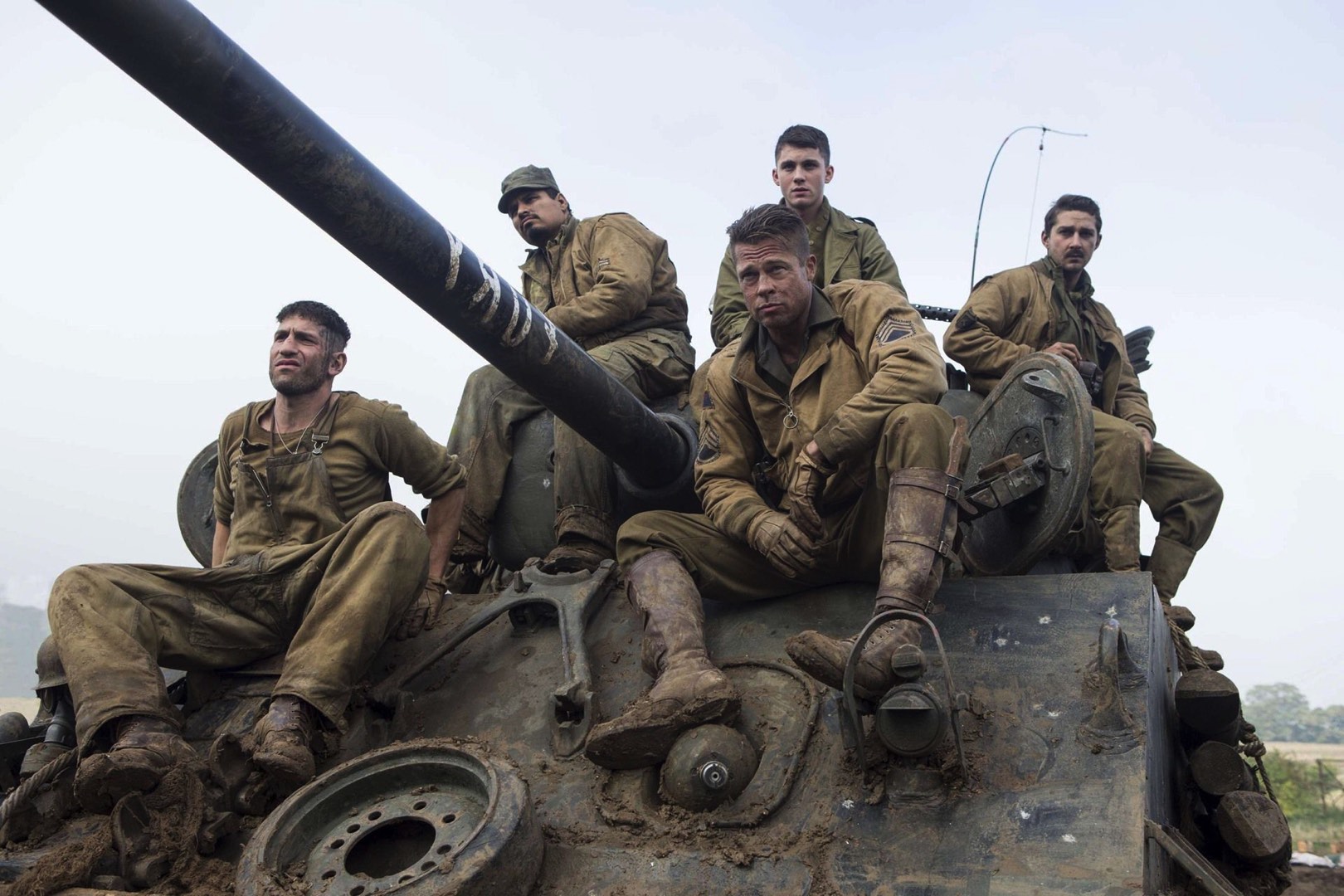 Premise: It's WWII, April 1945 and the U.S. has entered Nazi Germany. The fighting is intense. A tough as nails sergeant (Brad Pitt) commands a five men Sherman Tank group. When one member is killed they're assigned a young nervous kid, who's never been in battle before.

Review: Fury has been called a realistic war film. Nothing could be further from the truth. Fury works as a thrilling, action adventure film but don't look for reality. As Fury is about WWII it needed to have a realistic story and action, but with director/writer David Ayer, realism is out the window. Sadly this seems to be a trend with Hollywood block buster films. Instead of anything resembling realism, the movie takes on the feel of a video game. Not surprising as many of the movie goers will be part of the video gaming generation.

What we get with Fury is American soldiers portrayed as blood thirsty savages, while the Nazi's are stumbling idiots, who can't seem to shoot straight. The first scene starts with a surrealist looking battlefield, among the smoke and darkness of night lay the smoldering ruins of many destroyed tanks. Out of a tank pops the hero, Brad Pitt locked in hand to hand combat with a German soldier. Pitt takes his fighting knife in hand and thrust it into the forehead of the German. Very video game like...That scene tells you what you need to know about the next 2 hours and 14 minutes.

One of the 'realistic' parts of the film is the tank in this photo. It's the only running German Tiger tank in existences. It should have got top billing! Unfortunately the tracer rounds that are fired in the movie glow with over zealous CG look. I thought the tanks were firing lasers!

One of the most disturbing scenes was when the young Norman was forced to murder a German prisoner who had surrendered and was begging for his life. Wardaddy (Brad Pitt) forces poor Norman to murder the prisoner. 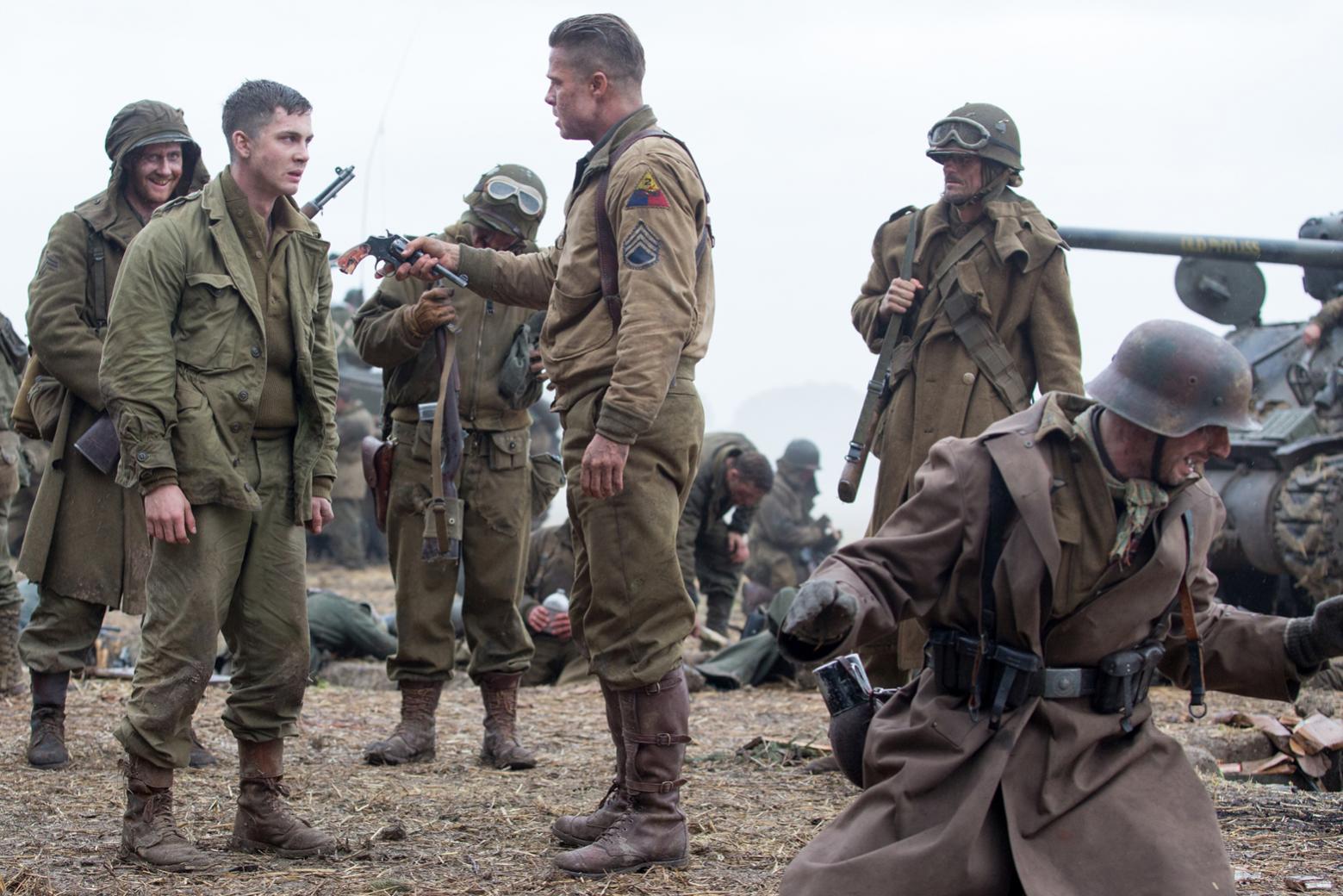 Not only does Wardaddy terrorize the new guy, so does the rest of the tank crew. I expected to see this conflict come to a boiling point, that would have been interesting...but no, latter on this becomes a buddy film and all pass wrongs are some how forgotten.

I could over analyze all the tank battle scenes as they aren't believable as the Germans have the advantage in the encounters yet miss almost every single time. But lets cut to the chase...

The end scene is stupefied. The lone Sherman tank is driving down a road when it hits a land mine, blowing it's track off. The tank is stranded. The young guy Norman is sent to a top of a hill as a look out. He spots a battalion of 200-300 Waffen SS soldiers marching towards the tank, many of them are caring Panzerfaust anti-tank rocket launchers.

Do the SS use their anti tank bazookas before reaching the tank that blocks their path, no. Do they take cover and send a few men to examine the tank, no. Instead they happily march up to the tank so that the Americans can mow them down, like shooting fish in the barrel.

Did I mention the scene with the face of a dead solder laying on the tank sidewall. Yes, it was a slice of a face with a nose and eyeball, just laying there. Or how about the scene where they go into a German town, battle...then start dancing, drinking and partying in the street...But wait, no one cleared the buildings of enemy snipers.

If you want a fun shoot 'em up, over the top action war film, then Fury is for you. If you want more realism along with a haunting story line try Saving Private Ryan or The Thin Red Line.