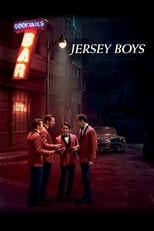 Release: Jun. 5th, 2014
Runtime: 2 hours, 14 minutes
A musical biopic of the Four Seasons—the rise, the tough times and personal clashes, and the ultimate triumph of a group of friends whose music became symbolic of a generation. Far from a mere tribute concert, it gets to the heart of the relationships at the centre of the group, with a special focus on frontman Frankie Valli, the small kid with the big falsetto.

We didn't find any linked discussions for this film. Here are the results of a quick search of possibly related threads:
19 Jersey Girl
any thoughts on this one its a kevin smith movie so im going to see but the cast looks realy dumb ...
1 Jersey Girl
Kevin Smith delivers a new batch of awesome characters in this emotional tale. The level of genuine realness, matched with intelligence, is Smith's prominent style of writing; which is dominant in all...
7 New Jersey High School does "Alien" on stage
...

seanc There is only one song in this movie that I don't care for, Big Girls Don't Cry, and it does not get a lot of screen time.
READ REVIEW

Citizen Rules Directed by Clint Eastwood, so I expected big things from this film.
READ REVIEW

Gideon58 I have to admit I was concerned when I learned that Clint Eastwood was going to direct the film version of Jersey Boys, the 2014 film version of the Tony-award winning Broadway musical, which was rather stupid because I never saw the show.
READ REVIEW