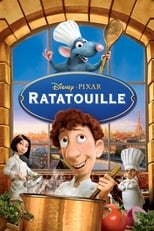 Release: Jun. 22nd, 2007
Runtime: 1 hour, 51 minutes
A rat named Remy dreams of becoming a great French chef despite his family's wishes and the obvious problem of being a rat in a decidedly rodent-phobic profession. When fate places Remy in the sewers of Paris, he finds himself ideally situated beneath a restaurant made famous by his culinary hero, Auguste Gusteau. Despite the apparent dangers of being an unlikely - and certainly unwanted - visitor in the kitchen of a fine French restaurant...

We didn't find any linked discussions for this film. Here are the results of a quick search of possibly related threads:
18 Ratatouille
So I am thinking this is going to be a solid movie this summer.. The animation looks great and its looks like a cute storyline.. its up against alot of competition but it looks so well done that I am ...
71 Ratatouille
I saw it on opening day and absolutely loved it!! This ain't a kiddy movie folks. Yes, it's rated G, yes, it's animated... but that doesn't make it a kids movie. This is a movie aimed at an older au...

mark f Linguini has very little past and very little depth (except for what Remy gives him), so it's not surprising that he doesn't especially grow after he learns he's the offspring of Gusteau.
READ REVIEW

BraedenG33 This is also in my opinion the best looking of all the pixar films, the animation in this film just has a beautiful quality to it unlike any of the other films (not to say that the other pixar films are in any way poorly animated, there's just something special about this particular one).
READ REVIEW

Citizen Rules I'm glad that someone decided to break all the movie making molds by giving us a film where a tiny rat loves to cook...and talks to a disembodied deceased chef for confidence...And sets the story in the heart of Paris, in the high cuisine world of fine dining.
READ REVIEW
View All (11)