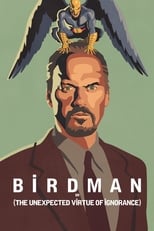 Release: Aug. 27th, 2014
Runtime: 1 hour, 59 minutes
A fading actor best known for his portrayal of a popular superhero attempts to mount a comeback by appearing in a Broadway play. As opening night approaches, his attempts to become more altruistic, rebuild his career, and reconnect with friends and family prove more difficult than expected.

We didn't find any linked discussions for this film. Here are the results of a quick search of possibly related threads:
18 Birdman
Wow, what a strange, intense movie. Birdman, The Unexpected Virtue of Ignorance, directed by Mexican director Alejandro Inarritu, is nearly 2 hours, and the the drama is turned up to 11 from beginnin...
0 Harvey Birdman attorney at Law!
this thread is for harvey birdman lovers. this is my all time fav american show. so funny ...
56 Birdman (2014) by Alejandro González Ińárritu
Am I the only one who is very excited for this movie ? I'm a big big big fan of Edward Norton since his debut in Primal Fear (1996) so I CANNOT wait until this movie to come out . Synopsis: A washe...
7 Original Birdman Ending with Johnny Depp
From Screenrant: "While on Jeff Goldsmith’s Q&A Podcast, Birdman co-writer Alex Dinelaris was on hand to talk about the original ending they had in mind for the film. As opposed to the off...

JayDee On a number of occasions the film breaks away from him to focus on the characters that surround him so it doesn't really work there either, not unless the entire film is all the delusion of one single man, namely Riggan.
READ REVIEW

MovieMeditation One of the most applauded and not the least excellent characteristics of the movie 'Birdman', is the rather impressive fact, that almost the entire approximately two hour long running time is captured in a visually stunning and ultra-ambitious manner, that shockingly presents the entire multi-layere....
READ REVIEW