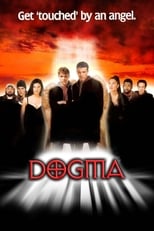 Release: Nov. 12th, 1999
Runtime: 2 hours, 10 minutes
The latest battle in the eternal war between Good and Evil has come to New Jersey in the late, late 20th Century. Angels, demons, apostles and prophets (of a sort) walk among the cynics and innocents of America and duke it out for the fate of humankind.

We didn't find any linked discussions for this film. Here are the results of a quick search of possibly related threads:
0 Dogma
When I saw Dogma I had seen a few of Kevin Smiths films but I really didn't know a lot about him as a writer or indeed as a director. I knew he often wrote films that many found to be quite offensive ...

The Gunslinger45 This was a movie written during director Kevin Smiths own crisis of faith, and was made as his own reaffirmation of his religious beliefs.
READ REVIEW