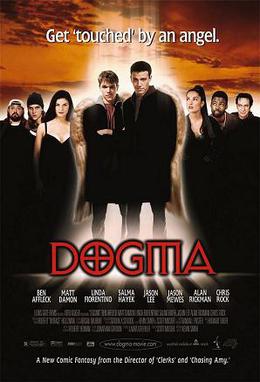 The quickest way to my heart is though laughter. And this film introduced me to the comedic director who became to my teenage and early adult years what Lucas and Spielberg were to my childhood. I was introduced to this film oddly enough through my parents of all people. Both were raised Catholic and decided to take me and my brother to see this movie in the theater when it came out. I get the felling however I liked it A LOT more than they did. And as soon as Jay and Silent Bob hit the big screen I was instantly sold, and had to seek out the rest of Kevin Smith’s filmography as soon as I could. This movie is downright hilarious and Smith would go on to be my favorite comedic director.

But more than that it is a film that is in Smith’s strange own way, a reaffirmation of faith. The movie starts out with the main character Bethany experiencing a crisis of faith. Not only does she doubt God’s existence, she is very bitter at the world. But by the end of the film and some really wacky and funny stuff throughout the film, by the end of the movie she has a solid grasp on her religious beliefs. Still snarky, but far less cynical. This was a movie written during director Kevin Smith’s own crisis of faith, and was made as his own reaffirmation of his religious beliefs. All be it with less emphasis on religious dogma (hence the title) and with more dick and fart jokes and Ethan Suplee dressed in a giant rubber poop monster costume. But still a movie that gets the point across without being as heavy handed as the 700 Club.

And it it’s strange own way it helps to reaffirm my own faith. Particularly in the day and age of the notorious church scandals that have rocked the Catholic Church. This movie helps to say “It is okay to believe in God and that Christ died for your sins even though you think the Church has made some MAJOR mistakes.” Because we Catholics are complicated like that; lots of guilt from our own sins and having to deal with a lot of BS out of Rome. But this film still helps me keep focus on what is important, and it is that important stuff that helps me keep going to church. Or I am just insane, who knows. Either way I love Dogma, and the people who think I am going to Hell for liking this movie need to find their sense of humor.