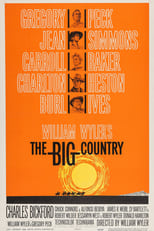 Release: Sep. 30th, 1958
Runtime: 2 hours, 45 minutes
Retired wealthy sea captain Jim McKay arrives in the vast expanse of the West to marry fiancée Pat Terrill. McKay is a man whose values and approach to life are a mystery to the ranchers and ranch foreman Steve Leech takes an immediate dislike to him. Pat is spoiled, selfish and controlled by her wealthy father, Major Henry Terrill. The Major is involved in a ruthless civil war, over watering rights for cattle, with a rough hewn clan led by...

Citizen Rules Superb story telling of a big story arch that encompasses idealism, romance, individuality and action too....All done with characters who act and speak in-accordance with their established personalities and back story.
READ REVIEW

Gideon58 William Wyler is no stranger to this kind of spectacle, it just would have been nice if he had been aware that his story isn't as original as he apparently thought it was, because he certainly takes his time telling this story, even though we can see what is going on about 20 minutes in, which wou....
READ REVIEW

Iroquois When you watch a film as long as The Big Country, you might have to question whether or not it needs to be as long as it does, and in this film's case I question it quite seriously.
READ REVIEW
View All (4)