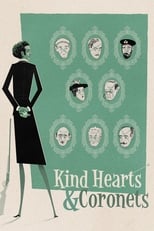 Release: Jun. 21st, 1949
Runtime: 1 hour, 44 minutes
When his mother eloped with an Italian opera singer, Louis Mazzini was cut off from her aristocratic family. After the family refuses to let her be buried in the family mausoleum, Louis avenges his mother's death by attempting to murder every family member who stands between himself and the family fortune. But when he finds himself torn between his longtime love and the widow of one of his victims, his plans go awry.

We didn't find any linked discussions for this film. Here are the results of a quick search of possibly related threads:
32 Hearts in atlantis
Has no one here seen this yet? I heard its out in the US already. Doesnt anybody here ever review new US movies? Wheres the reviews for Glitter? ...
6 Bob Hearts Abishola
This new CBS sitcom from the creators of Two and Half Men stars Billy Gardell, who spent six years playing second fiddle to Melissa McCarthy on Mike and Molly, playing the head of a family-operate...
2 Queen of Hearts
Trine Dylholm gives a career best performance in this fearless account of taboo love gone off the rails. Unremittingly bleak and genuinely shocking, but you can't help but watch it go from bad to wors...
1 Movie in the 80's Warm hearts- Cold Feet
Please can anyone help me???? I am looking for a movie that was on Sky TV in the late 80's is was called "Warm Hearts Cold Feet" it was played by Tim Matherson and Margaret Collin. I have t...

Citizen Rules Some might call them soap opera style, like it was a bad thing, which it's not when done well, and Kind Hearts and Coronets was done very well...With it's personal story of one poor man's rise into the world of rich nobility, as told by his first person narrative...in that way it reminded me of ....
READ REVIEW