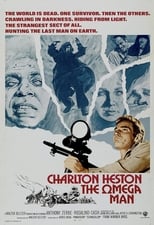 Release: Aug. 1st, 1971
Runtime: 1 hour, 38 minutes
Robert Neville, a doctor, due to an experimental vaccine, is the only survivor of an apocalyptic war waged with biological weapons. The plague caused by the war has killed everyone else except for a few hundred deformed, nocturnal people calling themselves "The Family". The plague has caused them to become sensitive to light, as well as homicidally psychotic.

0 The Omega Man
Maybe it's time they remade The Omega Man (1971)? Do you think there needs to be a new version and which current star could take Charlton Heston's place in the new version?...

re93animator The novel has spawned four notable films to date; among those films is 1964s The Last Man on Earth starring Vincent Price (which has since become a classic forgotten horror gem), 1971s The Omega Man starring Charlton Heston, 2007s I Am Legend starring Will Smith (which is the most famous version of the bunch), and a direct to video flick entitled I Am Omega that was released around the same time as the 2007 film, obviously put out to garner money and build off the success of the 07 version .
READ REVIEW

JayDee Using Richard Matheson's I Am Legend as its inspiration (though quite loosely from what I understand) the film has a great premise to base a film on; that being the story of the last man alive.
READ REVIEW