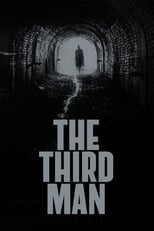 Release: Aug. 31st, 1949
Runtime: 1 hour, 44 minutes
In postwar Vienna, Austria, Holly Martins, a writer of pulp Westerns, arrives penniless as a guest of his childhood chum Harry Lime, only to learn he has died. Martins develops a conspiracy theory after learning of a "third man" present at the time of Harry's death, running into interference from British officer Major Calloway, and falling head-over-heels for Harry's grief-stricken lover, Anna.

MovieMeditation When it comes down to those modern day masterpieces or highly acclaimed classics, you are either going to be that first man who praises the film; that second man who despises the film; or you can be the third man, who are left standing between two different opinions, not knowing quite what to make o....
READ REVIEW