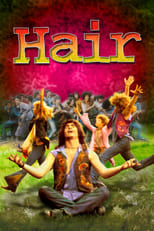 Release: Mar. 14th, 1979
Runtime: 2 hours, 1 minute
"Hair" is a 1979 musical war comedy-drama film adaptation of the 1968 Broadway musical "Hair: An American Tribal Love-Rock Musical" about a Vietnam War draftee, Claude, who meets and befriends a tribe of long-haired hippies on his way to the army induction center. Claude heads to New York upon receiving his draft notice, leaving the family ranch in Oklahoma. He arrives in New York where he is rapidly indoctrinated into the youth subculture...

We didn't find any linked discussions for this film. Here are the results of a quick search of possibly related threads:
5 Hair (1979)
Peace, man. Once in a while there comes across that musical that is more than just something comfy to watch. You become enthralled, fall in love with it. That's what happened with Hair. It ...

mattiasflgrtll6 But as he quickly becomes part of the group, we find out more what kind of a person he is, and he starts to mesh in perfectly with them.
READ REVIEW

Gideon58 Treat Williams lights up the screen as Berger, the unconventional and free-spirited hippie who does his best to get Claude to loosen up and is matched scene for scene by Savage as Claude, who brings a lovely sweetness to the role of Claude.
READ REVIEW