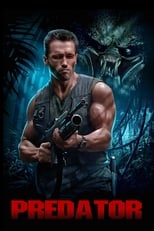 Release: Jun. 12th, 1987
Runtime: 1 hour, 47 minutes
Dutch and his group of commandos are hired by the CIA to rescue downed airmen from guerillas in a Central American jungle. The mission goes well but as they return they find that something is hunting them. Nearly invisible, it blends in with the forest, taking trophies from the bodies of its victims as it goes along. Occasionally seeing through its eyes, the audience sees it is an intelligent alien hunter, hunting them for sport, killing them...

41 John Mctiernan's Predator
There's something out there waiting for us, and it ain't no man. We're all gonna die. Action Mystery The Story is simple a Special Unit takes a mission to recover people that went down with a heli...

Masterman All these moments make Predator so badass, and one of the best action movies ever made.
READ REVIEW

Sexy Celebrity If you want a war movie with an alien, Predator is your movie.
READ REVIEW

The Rodent By far the best, and probably ever will be the best Predator movie and very close to being the best movie in my Library.
READ REVIEW
View All (9)