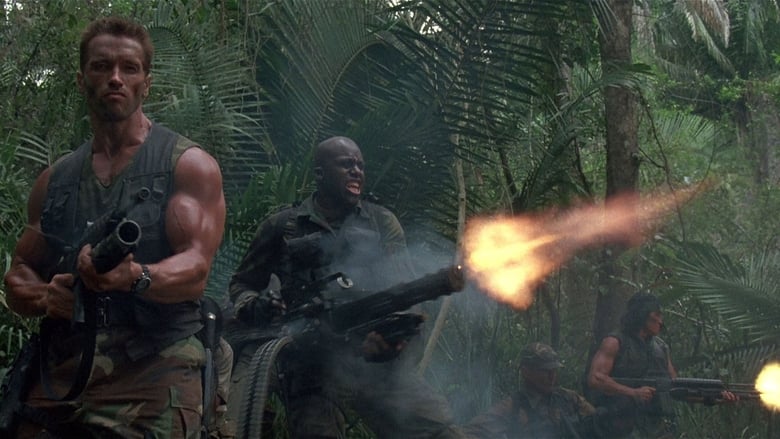 by Masterman
posted on 4/03/14
in
Predator
Directed By: John McTiernan

" Son of a bitch is dug in like an Alabama tick."

Ime going to start this review by saying Predator is the most badass movie ever made. Forget all your gangster movies, forget all your cop movies. Predator makes The Expendables seem like the club scouts. This is a movie made off testosterone. Seriously, everything about this movie screams badass. From the start of the movie where we see Carl Weathers and Arnold Schwarzenegger Shake hands...it sends buildings collapsing. With muscles bursting out there shirts, and veins bursting threw there skin we all knew what to expect.


Fun Movie Trivia
The original "Hunter" model was a large creature with a long neck, a head shaped like a dog and one big eye in the middle. This can be seen on the camouflage demo's on the DVD. It was only when Stan Winston moved in that the complete design of the now "Predator" changed, along with the title..
Predator is up there with the greatest action movies ever made. It's so original, and imaginative that's it's unlike anything else around (at that time anyway). It's a fun fuelled ride that I never seem to get tired of. The movie moves at such a fast pace, and delivers so much action that we forget all about the silly plot holes. Things like why the Alien is on earth, or why the hell it is even in the jungle fly over our heads. Things like that leave us with questions yet we don't care. We don't care because the movie is so exciting and entertaining that it doesn't matter.

Predator has so many moments, big and small that really make the movie shine. The scene mentioned above with the hand shake being one. The scene with Billy (Sonny Landham) standing on the bridge shouting the predator holding a knife. The scene where they unload on the jungle with all the gunfire they have. All these moments make Predator so badass, and one of the best action movies ever made.


Fun Movie Trivia
According to an interview with director John McTiernan, the "hole in the jungle" appearance of the Predator was played by Jean-Claude Van Damme in a "blue screen" (actually red) suit. Van Damme quit after two days, unhappy with being cast as an uncredited special effect, but can be seen as the Predator in "If It Bleeds We Can Kill It: The Making of 'Predator'". The alien was scrapped, redesigned and was eventually played by Kevin Peter Hall who was 7'2" tall.
Overall The Predator deserves every bit of praise it receives. It's a very special movie that still looks great to this day. The Predator is one of the most iconic movie characters ever created, and The Alien itself still looks amazing.
» More about Predator
» More reviews of Predator
» More reviews by Masterman