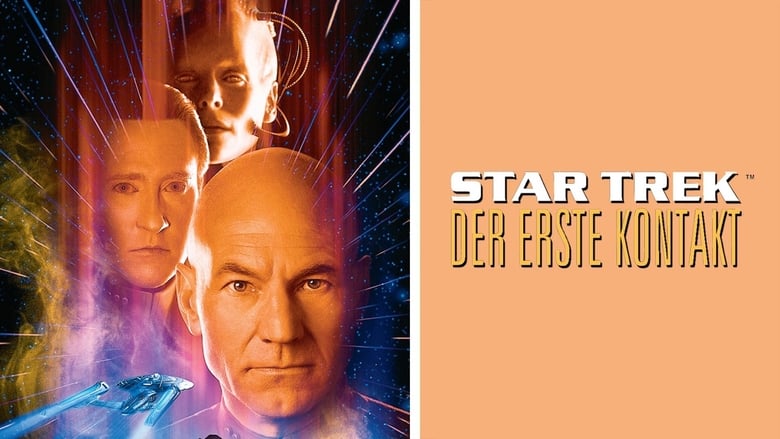 After their weak cinematic introduction in Generations, the Star Trek: The Next Generation cast didn't seem up to the job of fighting nasty aliens and trying to create galactic peace for twice the normal length. Generations just felt like an average, extra long episode of Next Gen, and it seemed like the series was done and dusted. But they gave it another go, and hoped for the best. And for good measure, they threw in time travel and the Borg, the series' most popular villains.

Jean-Luc Picard and his crew on the Enterprise head back in time to stop the Borg, a race of half organic, half synthetic drones, from stopping First Contact, the first meeting between humans and extraterrestrial life, and taking over the world. Picard slowly begins to develop into a madman out for vengeance, for what the Borg had done to him years earlier.

The story is simple enough and accessible enough for a wider audience to follow and enjoy. As far as it goes, it's pretty standard stuff: stop the bad guy, save the world. Where the film stands out amongst the rest, though, is in it's execution and the themes explored. The film is very Picard-centric, exploring his state of mind and psyche when it comes to dealing with the Borg. Usually, he's a calm, peace-loving diplomat, but the film takes him to a new interesting place: a lunatic who would rather put his crew in danger than back down from his mission of revenge against the Borg. It's very Moby Dick-like and it's very well executed and thought-out.

First Contact is generally noted for it's abundance of flaws and the biggest one is that of Picard. The problem is that he isn't Picard anymore. He's become a british Bruce Willis. He even wears a singlet towards the end! But seriously, as previously mentioned, the character has changed quite a bit from the tv series Picard we used to know. I, for one, like the change. This isn't a tv show anymore and an audience of non-Trekkies don't want to see a peace loving diplomat babble on for two hours. But the character of Picard isn't changed so much that he's unrecognisable. What we get instead is a new, multilayered iterpretation of Picard. A Picard so blinded by hate that he's forgotten the moral code that made him a Starfleet captain in the first place. And Patrick Stewart, despite not having the physicality for an action hero role, is plausible enough to pull off that aspect of the role. He delivers a great performance in First Contact, and while his routine gets weaker in Insurrection and Nemesis, it's fresh and believable here.

None of the characters in the film really get the same kind of development Picard does, save for Data and his capture by the Borg, and Lily, a woman from the 21st century who is eventually the one who gets Picard to see the error of his ways. All of the other characters get their moments to shine, albeit superficially (except Worf, who gets a couple of good one-liners and a lovely moment near the end with Picard) and they all deliver their usual solid performances.

There are many great moments throughout the film. Ones to keep on your toes, ones to keep you on the edge of your seat and ones that will have you thinking about the actions the characters make. Jonathan Frakes, better known as Riker, directs the film superbly, at a brisk pace and with a wonderful approach to each story thread. Amazement and wonder to the First Contact thread, tension and atmosphere to the Borg and fun and excitement to the whole package. The best moments, however, are the quieter ones, like the aforementioned scene between Picard and Worf (I think you're the bravest man I've ever known). And the score that accompanies these scenes and many others is perfect. Not many other words I can use to describe as well as that.

Remember how in my new top 100 thread, I said that The Voyage Home was my favourite Star Trek film? Well, I hadn't seen First Contact yet. I've watched it a couple of times now, and it gets better and better each time, and thats even with a friend pointing out the flaws as it went along (you may know this friend better as Peter Vincent, a fellow member here at Movie Forums). If you're a Star Trek or just a movie buff, Star Trek: First Contact has plenty of stuff in it to engage, entice and entertain.