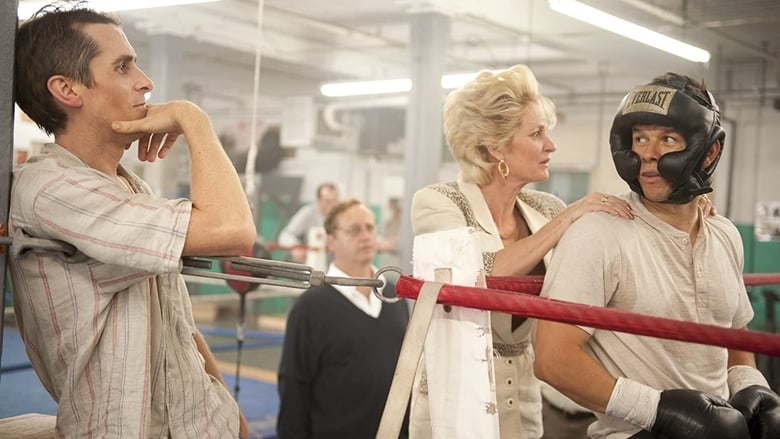 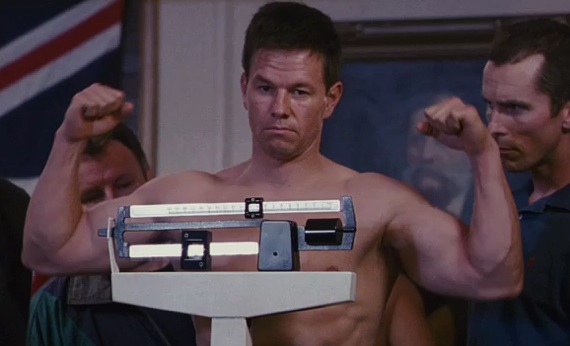 There's something wrong with The Fighter and Roger Ebert helped me clarify what it is (but don't read his review until you're done with mine). I noticed this during the movie and it really is the biggest problem -- Mark Wahlberg's character, Micky Ward, is a soft-spoken and semi-dull personality. He's no Rocky Balboa/Sylvester Stallone who speaks loud (but not always clear) with that booming voice. Micky Ward/Mark Wahlberg speaks very low and I often had to strain to hear him.

Christian Bale is the real star of this movie (and rightly deserved his Oscar), as Micky's half-brother, Dicky. Micky and Dicky. Cute. I wish my name was Micky and I had a boyfriend named Dicky. Anyway, Christian Bale steals the whole movie as the loud, crazy, cocaine addicted/crackhouse visiting brother that's trained silent (but hardly deadly) Micky how to be a boxer.

Micky has always looked up to Dicky. Back in 1978, Dicky fought Sugar Ray Leonard on HBO and actually won the fight. Ever since then, he's really been a nobody. Micky and Dicky and their icky family (Melissa Leo as the controlling yenta-like mom, all hair and cigarettes, whose performance everyone loves, and yeah it's good, but she was really annoying to me) all live in Lowell, Massachusetts -- not a good place to live, apparently. Nothing there besides drugs and bars.

There's about seven hideous sisters to Micky and Dicky that do nothing but sit around with each other all day, displaying their out of style, 1980's looks - hairspray, hairspray and more hairspray. I swear, this movie is like a trashy, drug infested docudrama version of Rocky, Goodfellas and My Big Fat Greek Wedding. I was reminded of Goodfellas a lot for some reason - I think it's the general feel of the whole movie. It has a very realistic, suburban madness quality to it. Then of course it's got a lot of Rocky-imitating scenes and some ridiculous Big Fat Greek Wedding characters (the ugly sisters).

My favorite part takes place in the jail Dicky gets thrown in halfway into the film. Before he went to jail he was being followed around town by an HBO camera crew, apparently filming a documentary about his life and comeback. Turns out they were filming him and the crackhouse down the street he frequents at and it's a documentary about Dicky's crack life. He gathers up the whole prison to watch the documentary and soon gets embarrassed when he realizes what the show is really about. This, of course, leads to tattooed prisoners fighting with each other when Dicky shuts off the TV.

Meanwhile, outside jail, Micky is calling his vicious ex, who has his young daughter, and telling her not to let the daughter watch the documentary, which is showing uncensored footage of her troubled uncle. Too late, she's already sitting comfortably in front of the TV. We see her watching Dicky take a crack hit.

Micky gets a new girlfriend in the movie - Charlene the barmaid - played by Amy Adams. I never really noticed Amy Adams before. I thought she looked like hell at the Oscars. What a horrible outfit. But here she looks a lot better - for a woman - and she plays a strong and likeable character who does battle with Micky's annoying mom and sisters (who, by the way, drive around everywhere together, all tightly fitted, in this old white car).

No nudity from Mark Wahlberg, which is a real shame. Sometimes there's some nice shots of his ass in athletic shorts. He has a sex scene with Amy Adams, but you see nothing and it's not even long, thanks to that annoying mom and those fat, ugly sisters pulling up outside in their car, knocking over trashcans.

So, in short: Dicky (Christian Bale) is the life and blood of the movie. The whole subplot involving his drug addiction was way more interesting than the fighting. They should have called this movie The Crackhead. Mark Wahlberg's Micky is underdeveloped and barely heard. Amy Adams did a good job, but still, eh, whatever. The mom and the sisters were sometimes funny and sometimes you hoped they'd die. See it because it's sweet, precious, quirky and sort of interesting.

Also, I think you see Charlie Sheen inside the crackhouse. Pretty sure I saw him there, right next to Mel Gibson.