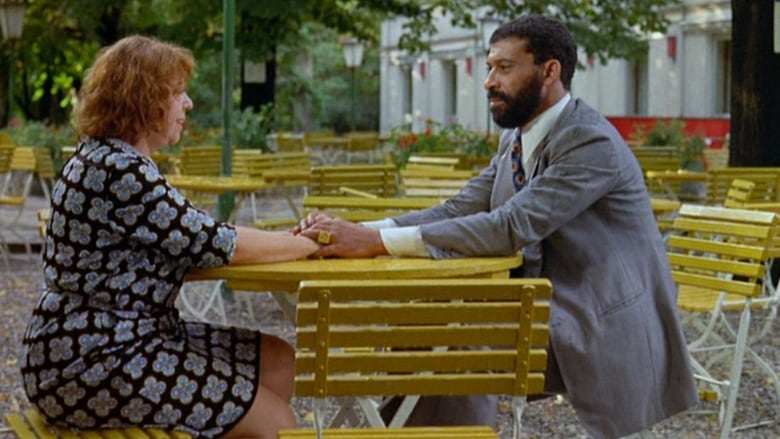 Fassbinder's incredible tale is another one of his more critically acclaimed work that deals with issues such as, yep, you guessed it, race, ageism and community. First saw this artful piece of european cinema back in 2006 in a Contemprory German Cinema module and it immediately spoke volumes to me.

As those of you who know me may be aware, i'm not one for romantic films. In fact I can't stand most of them, but Fassbinder hit a high with this one. I know most people would call it more of a melodrama than romantic film but I beg to differ. I feel the film is very much about the romance of different individuals and how its their communities that affect their relationship.

For those who are not familiar with Fassbinder's most touching moment, it tells the story of two people with very different backgrounds who fall in love: Ali (El Hedi Ben Salem), a somewhat complex Moroccan immigrant living in Germany and Emmi, (Brigitte Mira) a much older woman who herself is lonely and detached from German society. These two embark on a romance that's met with a lot of disdain by the locals who bigotry clouds their judgement.

I think the reason I love this film so much is probably similar to the reasons why I like the 3rd part of the Three Colours Trilogy. I'm not just talking about the age differences between the characters, but how the film can also be interpreted as an anti-romance even though I would ultimately reject the 'anti' part. For one, the romance depicted between the two leads is, in certain Brechtian sequences, rather 'dull' in that the camera literally just stays on them while they are sitting down on a couch in silence.

There is very little in the way of mushy going ons and 'oh i love you' body language that fans of the romance genre might be accustomed to. Pretentious? Maybe a lil, but I actually like the sequence and interpreted that these two lonely figures happen to be very comfortable doing absolutely nothing with each other, which, in some ways, is how I would interpret true love.

Throughout the course of the film, Ali gradually becomes more accepted by German society, which comes at a price as he becomes a bit less innocent and less charming. It's no secret that Fassbinder isn't a fan of his own country, but the way he darken's Ali's personality a little bit. He has a knee jerk reaction to the way his fellow colleagues poke fun at Emmi, and it just further examines the horrible ways in which society can affect even the simplists of romance. And while it's not unlike Fassbinder to have his protagonists act in a unsympathetic way, it's certainly unsettling to see such real scenarios that many people can relate to. It's brutally honest. Some may say too honest but still honest. Though it may be worth mentioning that Fassbinder does realistically paint Emmi as somebody who can be nasty herself in that there are few times where the influence of her racist colleagues becomes evident, like her treatment of an eastern european girl at her work place and her use of racial slurs.

Fassbinder himself pops up in the film as Emmi's very racist son in law. It's a role Fassbinder excels at and pretty much knew first hand how to play as he had experienced prejudice himself what with his homosexuality. I think it's significant to mention that Fassbinder had a relationship with Selem and that the story here is probably similar to the romance they had. It's definitely a film that feels very personal and such feelings can only occur when the author is reflecting on themselves.

All in all, this is a poignant and different piece of cinema that one really needs to see beyond words. Stop reading my review and go and order it if you haven't already seen it. Or better yet, if you have seen it, watch it again and watch a highly talented individual at the top his game, getting it all out in extroadanairy performances by two incredible leads.
» More about Ali: Fear Eats the Soul
» More reviews of Ali: Fear Eats the Soul
» More reviews by The Prestige