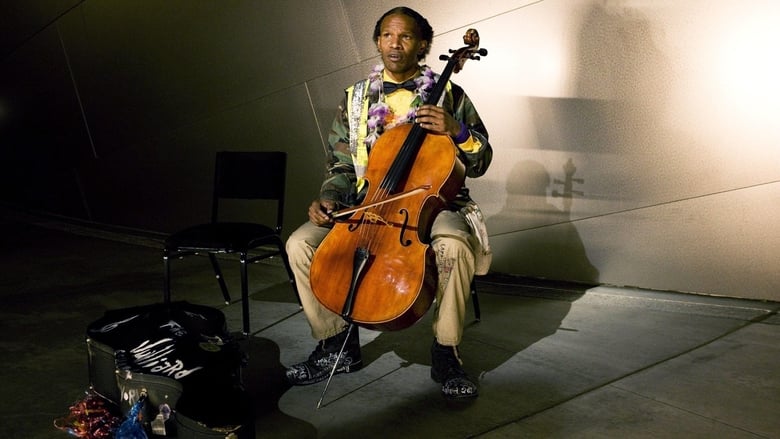 Ill be honest I wasn't that interested in seeing The Soloist mainly because I don't like Jamie Foxx but I thought 'at least Downey Jr is in it' and ended up seeing it all the same. The Soloist wasn't disappointing but it wasn't breathtaking either. A heart-warming story, some better then expected acting and lovely music. What I didn't like was that it lost speed just over half way through, to be fair it was relevant to the story but at almost two hours long I was underwhelmed.

Steve Lopez (Downey Jr) is an unpassionate journalist who meets a homeless schizophrenic man, Nathaniel Ayers(Foxx) playing violin on the street. Noticing his talent Lopez takes an interest in him, at first to write a column about him but as he gets to know more about Nathaniel he becomes his friend.

I found myself becoming more and more engrossed during the first half of the film. There are moments during the The Soloist that you get a very real and frieghtining look at the mind and motivations of someone suffering with paranoid schizophrenia. The real crux of the story is how Lopez relates and begins to understand Nathaniel, even though Nathaniel is eccentric and distant. This is where Foxx actually gets it right, the frightened look in his eye, energetic movements and constant self talk are scarily convincing. Downey plays a character similar to what has become typical of him in last few movies, confident, in your face professional type who is willing to go the extra mile to do the job or get the story, every bit as good as Foxx in my opinion. The Soloist explores how hard life is everyday for people living on the street, how a young musical prodigy in his second year at university can end up a bum on the street talking to himself. Captivating and unique but the story starts to unravel mid-way and loses that energy it had going for it when a key plot point becomes clear, I won't give that away here.

Despite the storytelling losing focus, Foxx and Downey never do. This is a a heart-wrenching story that is worth your time.