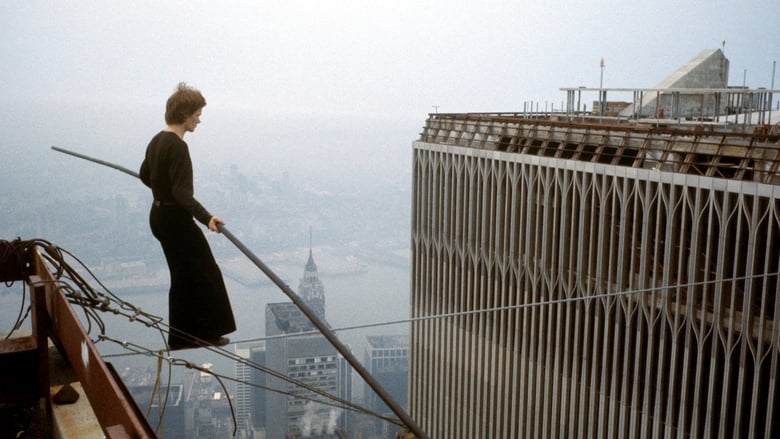 I've seen a few films in the last few weeks (on summer break), but this is the first film that has sparked me to write anything. In short, this film made me cry while causing a very strange sensation inside my body. I believe that sensation is referred to as "vertigo."

At the beginning of the year, I see there was a Mofo Discussion Group on this story of Philippe Petit's 1974 wire walk between the Twin Towers. I wish I had seen it then and engaged in the discussion. And I think Yoda was a bit cynical about it.

I do have a vague memory of the event but only in that I remember it happened. I didn't pay any great attention to it as I was 18 and had so many other things on my mind, lol. In the retelling of this story, so many years later after the fall of the Towers, it makes for very compelling cinema. The film is constructed of a mixture of black and white "recreations," a few of which were hysterical (loved the shadows), footage of a young Petit and his friends preparing for the high wire stunt, recent interviews staged with stark lighting, and documentary footage of the building of the towers. All of this combines for a walk down memory lane of a moment that was more than a walk--it was a dance in the heavens. The sheer audacity of it is one thing and if that is all the story was, that would be compelling in and of itself. But this was so much more. The film builds to the crucial moment and when that happens, the exhileration I felt was rare for a film like this. I agree with those that said it was "beautiful." And I don't think I have the ability to say why.

Often, documentaries fall into two camps: they are either dark and heartbreaking, exploring the tragedy of life, or they are exhilarating as they explore the strength and determination which exists in us all. Some of the time, they are both these things. What is so incredibly entertaining about a documentary like this is that this story is always just one slip from tragedy but we know it won't turn out that way. He will make it across. We know this. We are allowed to revel in his daring, celebrate his talent, wonder at this concentration, and gawk at his courage.

One of my favorite moments was when one of the arresting policemen described the walk as more of a "dance," and how he knows he will never see such a thing again. Inadvertently, this film becomes a love letter not only to the beauty of the act itself, but to the Towers themselves. We won't ever see such a thing again. That aspect of the story becomes the slip to tragedy just below the surface, a tragedy that is never discussed or is part of Petit's story. But it is there and we know it.

So in the end, the image of Petit dancing on the air between the buildings becomes more of a celebration that even Petit could have imagined.

In the special features section, there is a cartoon rendering of the story. If you rent the film, check it out.