by The Prestige
posted on 4/12/09
in
So now we are onto lucky number 13. Hope you all are still with me on this MoFo because it'll be at least 3 years before I conduct another list.

Anybody who has watched a Clint Eastwood film will almost certainly have seen Unforgiven. It's a pivotal moment in Eastwood's filmography and is widely seen as his 'love letter' to the westerns of the old.

The film deconstructs the western and it's mythos and, when you really think about it, was a very brave and risky project for Eastwood to take back then. After all this is an actor/director who became an icon by starring in such films, so to completely strip away the glamour and convey raw, uncomfortable truths is admirable in itself. And if those who are of an older generation and were a big fan of Clint Eastwood (like my grandfather was), chances are you guys didn't like Unforgiven the first time round. But the idea is to forget everything you know about the west and watch as Eastwood strips everything away, robbing us of our innocence.

Another brilliant thing that works really well in Unforgiven is Eastwood's faith in his spectator's intelligence. Y'see, William Munny was a bad gunslinger who did horrific crimes. At one point, he was considered to be the most feared outlaw in the west. Eastwood doesn't oblige in showing us unecessary flashbacks to emphases how evil Munny was - it's all in his face and dialogue. Say what you will about Eastwood as an actor, but I loved that he was able to convey a man who seems to only just come to terms with how violent he was in the past.

We know that Munny is reluctant to take the assassination job, but you just can't help but think that if he really wanted to honour his late wife he would find some other way of making money. You just know that there is still a monster laying dormant inside Munny in his pursuit of the killers, despite his excuses for 'justice' and 'money'. And that's the thing, you never truly believe there is a legit motive for Munny to 'get back in the game'. He still has a dark pas.t It's that exploration between his past and present that make him such an interesting protagonist. Only other western protagonist as interesting as him in recent memory is Tom Stall/Joey Cusack. 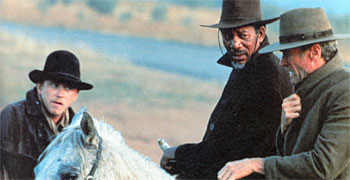 I can't stop without mentioning the supporting cast. Gene Hackman (please come back to acting

) is, in a word, phenomenal as the quietly snarling and strangely compelling Little Bill. Little Bill's lust for authority and ruthless aggression mentality is uncomfortably believable. I got the feeling that Little Bill had started out as a man who had a genuine intent to improve society and help the helpless. But somewhere along the way, much like Munny, he lost himself and turned into his opposite. Can't blame him really. We all turn into our opposites. It's about which side dominates, just like in Ryan Fleck and Anna Bodem suggested in Half Nelson.