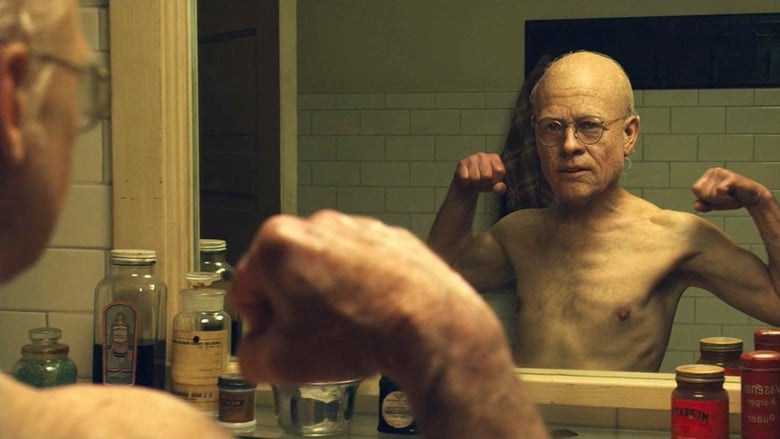 The Curious Case of Benjamin Button

I saw this on Christmas morning with my family. It was a sold out theater and I'd be willing to bet I was the only person there who wasn't crying at one point or another during the movie. Everybody seemed to love it and they all thought it was so sad and beautiful and whatnot. I dunno, maybe I have no heart, but I was not blown away. It's an interesting flick with a solid gimmick, no doubt, and I was always mildly curious about where it would go next. But there's a big difference between being mildly curious about where a film's going next and being balls to the walls emotionally invested in it. Like I said, though, I'm the only one who wasn't in love with it so what do I know, really?

Last week I wrote that Milk flailed a little (as most biopics do) because it's so dang hard to condense a person's life, or part of their life, into one movie. I think, in essence, that's this film's fatal flaw. The scope is just too big and, in turn, the movie has long stretches that seem to drag on and on and on. So the flick's overlong and the lame framing story with Julia Ormond and Hurricane Katrina doesn't help. Outside of those hospital scenes, though, you can't really cut much else out of there, so I'd like to propose we all go back in time and push for a Ben Button mini series instead of a movie. This is a good story, but I'm pretty sure it would've been much better served in that type of format. It would've allowed for a tighter pace, I think, and a more satisfying, less rushed conclusion. But I don't own a time machine and I'm not the head of HBO, anyway, so that's probably not gonna happen.

It just seems like each chapter of Button's life is a movie unto it's own. Very episodic and very Gump-esque in that way. I'm sorry for that inevitable Forrest Gump comparison, by the way. I got pretty sick of every review for this thing mentioning Forrest Gump, but then I saw this and now I have a well and good idea of why Forrest Gump was mentioned in every review (Captain Mike!?). Benjamin Button is definitely the more cynical, ambitious, visually exciting film and it's unarguably more unique in both its story and its aesthetics. It also looks just about as good as Fincher's Zodiac (which is high praise) and it's more than impressive on the big screen. But the movie still can't help but come off as the Forrest Gump for adults. The similarities are too many to not be distracting and that's too bad. Amazingly, though, Benjamin Button's life is still more down to earth and believable than Gump's.

For the most part, the romance between Cate Blanchett's Daisy and Pitt's Button works. It's heartbreaking when it's supposed to be, it's obviously told in a different kind of way and it's superbly acted. Unfortunately, a lot of the rest of the movie seems forced or hokey and the majority of people who pass through Button's life are majorly uninteresting and feel like pointless sideshows. I liked Tildon's scenes, but again, that just felt like an episode of "The Benjamin Button Story".

So, yeah, to recap: "The Benjamin Button Story" could've been a great mini series or something, but as a feature length movie it falls short. It's got some parts that work, some parts that fail outright and ultimately it didn't do a lot for me. Bummer.

Don't have a whole lot to say about Stuck, but I sure did like it. That balance between dark comedy and horrificly violent exploitation is a tough nut to crack; so when a movie like this succeeds you've gotta give it a ton of credit. It's also acted really well; which is a bonus you wouldn't necessarily expect going in. I hate when critics say somebody was a "revelation" or whatever but, damn it all, Mena Suvari was a revelation in this movie. And she has a perfect butt. Anywho, I'm sorta surprised and disappointed Stuck didn't get a bigger release, because I think a lot of different kinds of people would dig it.