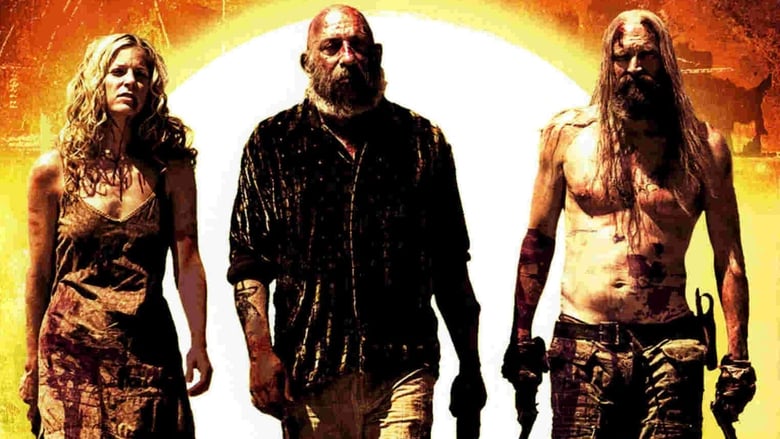 Where to begin? It is hard for me to decide, sitting here and reviewing the emotions I experienced while viewing Rob Zombie's second ever attempt at film creation, whether to start by lambasting the end product or highly praising it. Perhaps a bit of the required information should be given while I think.

The Devil's Rejects was released in 2005, presented as a pseudo-sequel/spin-off to Zombie's House of 1000 Corpses, which dropped two years earlier in 2003. The film stars Sid Haig (Captain Spaulding), Bill Moseley (Otis B. Driftwood), Sheri Moon Zombie (Baby Firefly), and William Forsythe (Sheriff John Quincy Wydell), and offers the dubious feature of being written, and not only directed, by Rob himself.

Ah. Now that that's out of the way, I believe I'll start with a lambaste. The Devil's Rejects is an absolutely sick, twisted, unrepentant, and perhaps socially misguided conglomeration of schlocky 70s camera work, nails-on-chalkboard moments, and gritty Southern tunes. It is hard to find a facet of Rejects that could possibly redeem it to those who view it in the wrong light. In fact, almost anyone expecting a straight up horror movie is bound to be disappointed and more than a little disturbed by the end. The acting is good, even commendable, but it's often overshadowed by the sheer intensity of each given situation. And an almost palpable air of tension and menace overrides any attempt at serious dialogue or emotionality (save for one particularly well done scene in the last 15 minutes of the film; more on this later). Then, of course, there's the violence itself, which is certainly graphic, but that's to be expected of almost any R-rated feature today and certainly a given in a Zombie film. What's really unsettling, then, is that the violence is far less nauseating than some of the head games the rejects play with their victims. In one scene, Otis forces a woman to wear a mask fashioned from the face of one of her companions. In another, Sheriff Wydell allows a certain someone not to be named for fear of giving spoilers, to run so that he/she can know the terror being chased by a large, burly man with an axe. Finally, Zombie seems to be almost commending his rejects at times, which makes for the stomach-turning sensation of being in way, way over your head (that is, if that sensation isn't already present after some of the scenes described above). There is a lot to be said for ending this review on just that note. Nauseation. But unfortunately, it would be unfair to Zombie and to his brainchild to conclude things without adding this: The Devil's Rejects is a masterful piece of work. Yes, that's right. After all that, I called Rejects masterful. But there's no getting around it.

And now, of course, I must explain why.

First off, there is that constant tension that I believe I mentioned earlier. Few films I have seen have done such a job of maintaining tension. This feeling, I believe, is due partially to the crappy (purposefully) camera work itself. There are no glossy effects here. Just grit, freeze frames, stuttery slo-mo, and some jiggling and light refraction, almost, but not quite, as if the entire movie was shot by one scared-witless guy and a home camcorder. The colors are muted. Everything, inevitably, fades back to that same sandy white-brown. And everything is dry. I don't remember seeing water, except in a sink, at all. This lack of moisture, of color, of life, adds a breathless quality to the tension. Almost panic. In other words, Zombie gets you right where he wants you.

Don't you just want to get a picture with him?

Second, the film is a brilliant homage to the kind of grindhouse, exploitation cinema that Zombie clearly adores, and some moments feel Tarantino-esque. Not much more to say on this front, except that it's nice to have another director for this kind of cinema really doing well again.

Third... the really nauseating bit. Zombie does a brilliant job of making you absolutely hate his protagonists, revile them so much you can feel it--and then turning all of your emotions on their heads for the final sequences. In the end, despite all of your better instincts, you feel profoundly sorry for Zombie's rejects, these heinous, twisted, inbred minds. You actually want them to succeed, to escape, to reach their goals. And this want is always underlied by your memories of their irredeemable acts.

What have we here?

In all, you'll turn off Rejects feeling dirty. Of this, there is certainty. But I believe you'll also feel somehow elated, in the same awful way you feel elated after watching a terribly sad movie or a particularly violent fight. These feelings mean that Zombie has done his job. He set a goal for himself and accomplished it with Rejects, a wholly abominable masterwork of horror, shock, and tension. Rent it, but don't buy it until you're sure you can stomach it.

Oh, and a final note--watch it with friends. If you don't, most of Zombie's carefully inserted dark humour is sure to go unnoticed.