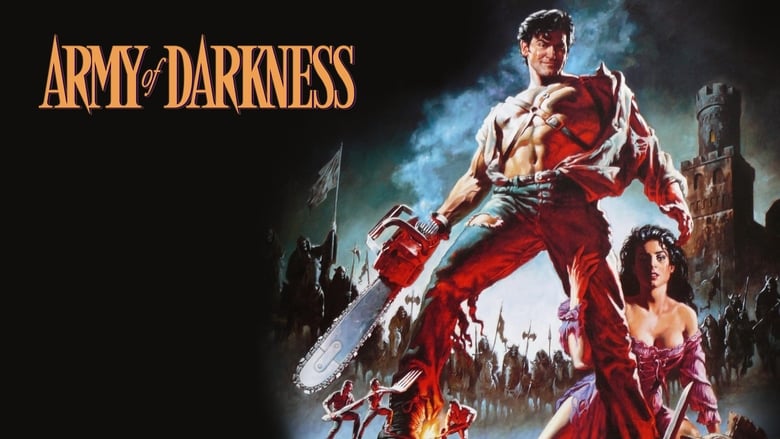 
Well, I don't think I'll have very much background to explaining to do here: if you haven't seen Army of Darkness you've probably at least heard of it. It would be hard not to.

Army of Darkness stars the badass cult icon Bruce Campbell, best known for his roles in The Evil Dead (1981) and The Evil Dead II (1987), and was directed by Sam Raimi.

The King himself.
That's enough background, it's really all you need. Oh, the film was released in the United States in 1993.

So, with that aside, I can proceed to the meat of the review. Army of Darkness starts off at a furious pace and never really lets up, and there is a sometimes-uncomfortable feeling of being rushed throughout. We learn, in about five minutes, that our hero has been sucked backwards in time by an evil portal generated by the malicious forces he encountered in The Evil Dead II. He has since been captured by patrolling knights who believe him to be an enemy and, after being stripped of his signature shotgun and chainsaw, driven with other captured prisoners back to the castle proper.

There follows one of the best scenes in cult history, but I won't spoil it here. In fact, the rest of the movie, despite its frantic pace and almost ridiculously shallow premise, is full of classic-ness... in terms of both dialogue and action alike. I mean, what isn't cool about Bruce Campbell pulling himself out of a book bound in human flesh that's actually a disguised black hole?

Oh yes.
I will take the time to point out a few major flaws, however. First off, we barely get to see Campbell make use of his trusty chainsaw at all over the course of the movie. Instead he has an (admittedly pretty cool) super-strong metal hand that he builds in a medieval smithy. Second, during some of the potentially hilarious scenes there are occasional completely out of place noises when Bruce gets hit. Such as maybe a bike horn blowing when his nose gets socked by a skeleton. Finally, and this is a personal thing, there isn't nearly enough gore... well, there is at one point, but otherwise there isn't. Of course this is largely due to the fact that Bruce is taking on an army of skeletons, but some grin-inspiring decapitations of humans by skeletons I don't believe would be out of line.

I really don't have much more to say about this little gem. Don't watch it expecting anything deep, or anything scary, and be prepared for some excessive stupidity, but overall Army of Darkness is a cult masterpiece that really should not be missed. In fact, I may have to go watch it again right now, so before I go, "Give me some sugar, baby!"