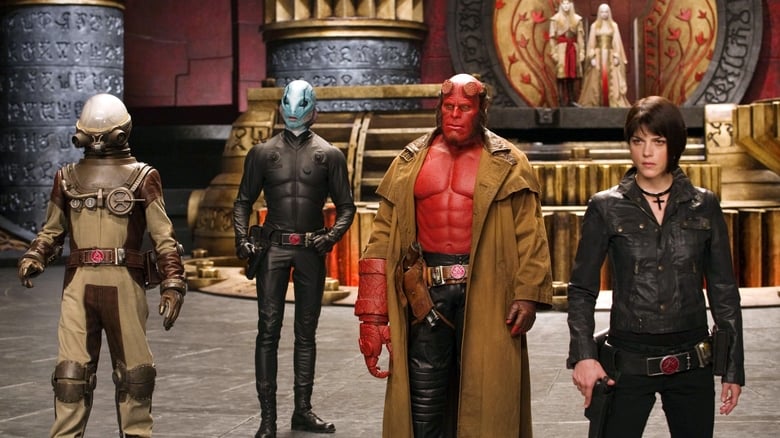 Determined to ruin the peace between humans and mythical creatures, Prince Nuada prepares to launch the unstopable Golden Army to wage war & destruction on mankind.

So, as you would expect from a sequel, the bar is raised, bigger action sequences, stunts, cast etc are all in place, but unfortunately, for this reviewer, Del Toro has taken his eye off the ball this time.

I'm a huge fan of Del Toro as a director, but to be honest, Hellboy 2 is in my mind his poorest, most formulaic film to date.
The original Hellboy was a joy to watch, but I felt my mind wander several times during the sequel, far too much CGI and a wishy washy story failed to hold my attention throughout.

The dynamic between Hellboy & Liz was more of a distraction than a worthwhile addition to the film, whilst other story arcs did little to intrest me or keep me engaged, as for Luke Goss, if you've seen Blade 2, you've pretty much seen his performance already.

I might seem to be a little harsh, but I was hugely disappointed in the film, Del Toro has been a director who's work has constantly hit the heights, but Hellboy 2 never really seems to get going, it seems to be constantly pulled in different directions and has no real sense of purpose or sense of impeading dread to liven things up.

I will watch the film again on DVD, perhaps I was in the wrong frame of mind, or maybe Del Toro is human after all, every director has a turkey in their collection somewhere, only time will tell.