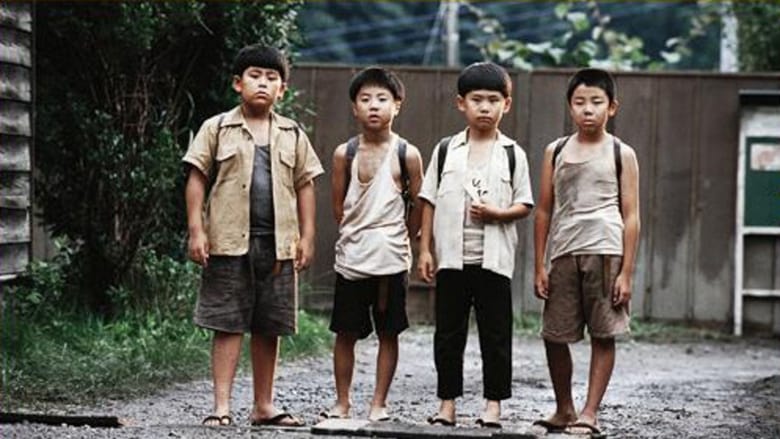 Glory to the Filmmaker!

It's hard to know where to begin with Kantoku - Banzai, it really is. Perhaps the best way to approach things is to first offer a potted filmography of Kitano's recent work.

After the divisive critical responses to Brother and Dolls (though I still maintain that Dolls is one of the most affecting films I've seen), Japan's Renaissance Man and all-round auteur found himself going in a completely different direction with the supremely enjoyable (and accessible) Zatoichi (2003).

How on earth does one follow that up without being further pigeon-holed and making a quick yen with Zatoichi 2 or another existentialist Yakuza drama?

The answer, for Kitano, was to look inward. This resulted in the essay in deconstructionalism that was Takeshis'. Takeshis' was everything that Zatoichi was not - willfully impenetrable to the casual observer and more than a little self indulgent to even a devoted fanboy such as myself.

Kantoku - Banzai sees the director attempting more self-analysis, this time with a comedy not seen since 1995's Getting Any? (a film that I do not have an awful lot of time for). The basic premise has Kitano (playing himself in a similar, though not identical, fashion to Takeshis') attempting to overcome a succession of box office flops by making films in a variety of different genres; accompanied by the voice of a wonderfully bitchy narrator who details each effort's shortcomings to the nth degree.

Some of these films-within-films are great: the tardy Ringu rip-off Noh Theatre; the homage to everything Chop Socky (and more than a nod to Zatoichi) that is Blue Raven: Ninja Pt II and the tale of family strife set in the 1950s, Coal-Tar & Rikidozan.

This last slice of picaresque fantasy is especially diverting, harking back as much to prime Mike Leigh as it does to Ozu. If Coal-Tar & Rikidozan had been made feature-length and left at that I'd have been a lot happier, in fact.

Around the film's half-way point, Kantoku - Banzai shifts focus towards just one film, the supposed Sci Fi thriller The Promised Day, and this is where things take a marked turn.

Superficially, the Promised Day segment is merely an excuse for Kitano to indulge in the broad slapstick of Getting Any? - cue tons of knob gags, people falling over, cross dressing and general mayhem. It even gets a little Pythonesque in places...crossed with an adult episode of the Tellytubbies...

Maybe I just don't 'get' Japanese humour. Maybe this is why I found Getting Any? such hard going.

Maybe this is why I found parts of Kantoku - Banzai almost toe-curling in their crassness.

Gloom was beginning to descend on Chez Tatt, let me tell you, so I forced myself to watch the entire film again and, putting cultural differences/expectations to one side and trying to focus on what the director was trying to tell me, the patient viewer. The answer is probably (I say 'probably' because Kitano has a fantastic habit of not giving a flying **** about what people think) nothing more than a sideways look at how the Japanese public expect one of their idols to behave.

It's quite apparent that the 'Kitano' character turns into an indestructible fibreglass mannequin whenever the going gets tough. In fact the scenes between the various film-ettes on show portray our hero desperately attempting to kill off his static alter ego...

...Make of that what you will.

In summation, then, Kantoku - Banzai reminded me of Monty Python's Meaning of Life - A succession of disparate sketches hung on one tenuous hook. Heck, there's even a Gilliam-esque animation sequence and the closing Glory To The Filmmaker title comes straight out of Life of Brian.

The movie's second half is tough going. Indeed, were it not for the decidedly daffy interplay between Kayoko Kishimoto and the achingly cute Anne Suzuki I might have found myself reaching for the FF button in places. *

Unlike Getting Any?, however, Kantoku - Banzai has a heart the size of a heavyweight wrestler (and there's a wonderfully daft wrestling scene here - how's that for a segue?

) and is rescued by an interestingly pointed first half with one genuinely great chapter - if you liked Kikujiro the the film is worth getting for Coal-Tar & Rikidozan alone - and just enough cultural commentary and loveable characters in the second.

As the doctor says at the end (after giving the mannequin Kitano an MRI scan, natch), "Mr Kitano, your brain is broken."

For all its flaws, Glory to the filmmaker!

* For those of a lecherous disposition, the first half features a few appearances by Yuki Uchida (including one where she's wearing the tightest jeans in the known world) who is, and I'll stop before I dribble over the keyboard, one heck of a fine lookin' woman.