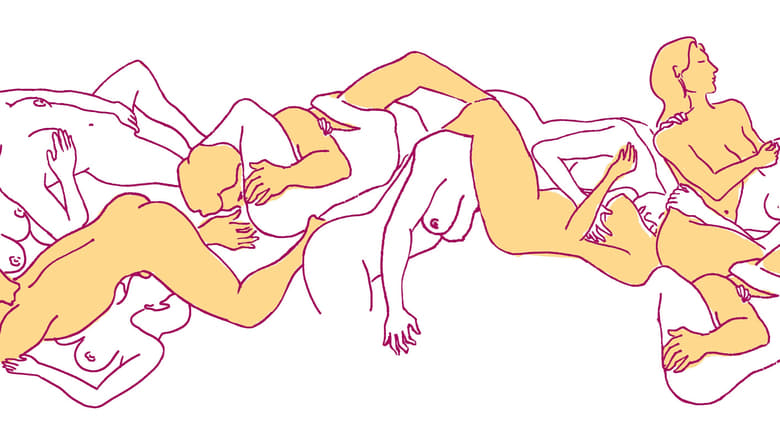 The online synopses tend to simplify the storyline. Just because there's lots of very visible sex doesn't mean the movie is about sex and love. Sheesh.

In fact, this is a story about learning to love yourself and others, as you are. One major way we do that and find out who we are (and how and how to love) is through sex, but also just through how we connect with others. Verbally, visually, by the name we call ourselves, by who we choose to befriend and keep, by what we do for a living, by who we pick as a lover, as well as what we do with them in bed.

It has some very strong, sometimes scary, often gauntly evocative scenes. It has some very funny moments, and some very awkward, painful moments. In this way, it reflects the ugly duckling walk we all make in life trying to figure out who and what we are, while having sex and making love, but also just by living.

So there was hype about the risque nature of this, and being a perv, I went to see it. Also, being an erotica writer made me go to see it, and the friend who invited me is a free spirit who I felt comfortable going to see it with.

That being said, you had better be accompanied by someone who is very open minded and free spirited, someone you are not afraid to be with in the same room watching sex on a screen together, even if it is for art. On top of that, if you are okay with watching sex with the person, be sure THEY are. And I mean be sure. Really talk about it, don't just hint it.

One more thing ... yes, there's more ... make sure anyone you watch it with knows it's for art. Just like you're taking them to watch film noir or all the weird stuff at the local film festival. Otherwise you'll bring the wrong person with you and weird them out, offend them, confuse them, make them chase your tail - or all of the above.

So, this is a flick by John Cameron Mitchell, who directed "Hedwig and the Angry Inch", a visually beautiful, freakish ode to ... well, freakishness and beauty. In a way, that's the same thing you're going to get here, told from multiple points of view instead of the one. We get a cast of 20-somethings in a hyper-art model of New York City, but our most prevalent are two couples: Sofia/Rob, Jamie/James.

Jamie and James have been together for 5 years. Jamie is a grown up child actor doing who knows what for a living. They used to both be Jamie, but now the second (hotter) James wants his original name back. He's become a Mona Lisa in his silently angelic mental/emotional unavailability over their 5 years. James is supersweet, superkind, yet always super-not-yours. He conducts secret filming sessions while Jamie is either not around or unconscious for a great film project you don't see until 3/4 of the way through the film. Jamie is aware of the distance growing between them but is becoming overneedy, overshowy, and overtrying, in his attempts to keep what he senses he's losing.

All that being said, the storylines in and of themselves are already fascinating. It's just about watching how they play out to see why these people are on the shortbus in the first place, and what it means for them, and how they figure themselves out by the end. It's also about watching them have sex and figure out who they are as sexual beings, which is as multiple and varied (limited by the film's time limit, budget, and storyline) as any human being's life is. Sex comes in all kinds, good and bad. Funny or serious. Empty and full. Slow and luxurious. Public or private. Harsh and exacting. Selfish or giving, etc. So you have to be prepared to see some cellulite slapping, a muff unshorn, someone asking to get treated sexually in a way you'd never thought of or wanted to see on a 60 foot square screen.

Our bodies are our bodies, and they're real. They smell, they stink, they make funny noises, they taste good, they taste bad, they gain weight, they lose weight, they shine with glory. This film makes you face that humanity because there's no way you're going to be able to hide from it when you're both naked and your body parts are sharing real estate.

Based on Mitchell's last movie alone, I knew what he was about, which others probably did, which is why we went to see this movie. We wanted someone who understood it was okay to be different. It isn't a coincidence that an indie filmmaker should attract indie film watchers in this way. Simply by being "indie" we are saying "independent." Alone, ready to stand alone, willing to stand alone and make a movie about something different, in a different way, for different viewers. Mitchell is okay with who he is and makes movies about being okay with who you are.

Why is there a club called Shortbus? Justin Bond wants to provide a place where people can make connections - like a circuit breaker he says. People are always seeking a bond, longing for them, yet we never find a way to do so, or do so in a safe happy place where others are openly there for the same reason. And his club allows people to come and do whatever they want - whether it's stay fully dressed, whether it's sing and perform, whether it's meet new people, have sex with new people, or talk with new people.

When all the power goes out in New York the city is in effect overloading with the need to make that connection - and somehow, in our movie at least, everyone finally gets to. The people in Shortbus are not just pervy freaks. They're human beings in search of something and it isn't just sexual gratification. They're looking for emotional gratification, and this club is a place where they have made friends that they care about and are rooting for - as we are, while watching.

If you look at the movie's subtitle, it's "You have to get on to get off." It's a play on words that implies orgasm but really means you have to get ON the shortbus - the yellow bus infamous for driving the disabled or challenged to school in the US. Getting off here means finding sexual/emotional enlightenment - with yourself. You're not going to figure yourself out or what you want unless you take risks and unless you get on that Shortbus - get stupid, get silly, embarass yourself, fight, run, scream, beg, embrace, risk telling someone you love them or that you don't want to be with them any more, and learn to be satisfied with who you are.

This comes full circle to Hedwig... it was a film about a person who knew s/he was different, and had to be what s/he had to be. In that film, s/he was the only one this way, and it was all about her. In this film, everyone is, in effect, Hedwig. Straight, gay, lesbian, pansexual, into pain, into giving pain, into autofellatio - whatever it is you need to do, do it. You are who you are, and you are beautiful just the way you are. You may not find someone else out there to appreciate it, but you most likely won't until you get ON that bus and learn to accept it before you can get off and go find someone else who does, too.

Definitely worth watching if you can handle the sex. I do think this movie fell below a par a bit for some oversappy sentimentalism, but again, Mitchell is about playing up the beautiful and exultant in humanity. In this movie he's playing up the sex of all kinds for all kinds, which I totally agree with and support, I just didn't need 5 minute frames loaded with unspoken meaning on James' face or 10 min of every sexual variation possible. He definitely wasn't always going for subtle, which I sometimes prefer.

I also thought that the movie suffered a bit from the dangers of mixing real actors with real sex. Sex is instinct, inherent, natural, chemistry. Acting is a different sort of chemistry altogether and most actors (probably, since I can't get a list of them anywhere) probably are better at simulating sexual frisson than they are at generating it on cue in front of cameras and crew.

I don't know if we've seen a piece of porn with real acting, script, and cinematography that was moving, and I doubt we ever will. So when Mitchell had his actors have real sex he introduced all kinds of complications that I feel were noticeable in the movie - sometimes it seemed people were concentrating on having the sex for the camera so it didn't seem quite as believable as if it were the real deal. You say, thmilin, that's a lot to ask, these actors are doing their best! Yes, they are, and their best is acting, not having real sex while acting. They gave it a good show though. I just couldn't get past the clash of the trying enough to ignore it.

I will say that James' scene was perfect, actually, so his acting felt real. Or his sex act felt real. Or his real sex felt like acting, so it felt better than it would be if it were real and being done by actors. Whatever. You know what I mean. (Inside joke: He has the sex scene with himself.)

The score is actually very very beautiful (again, oversentimental sometimes). We also get Justin Bond singing a lovely song at the end, which some might find over the top but he was tying up the loose ends for the movie. He is, in a funny way, actually like Mitchell by making these movies - leading everyone into the light, encouraging them to be who they are, and love themselves, perversions and all.
» More about Shortbus
» More reviews of Shortbus
» More reviews by thmilin