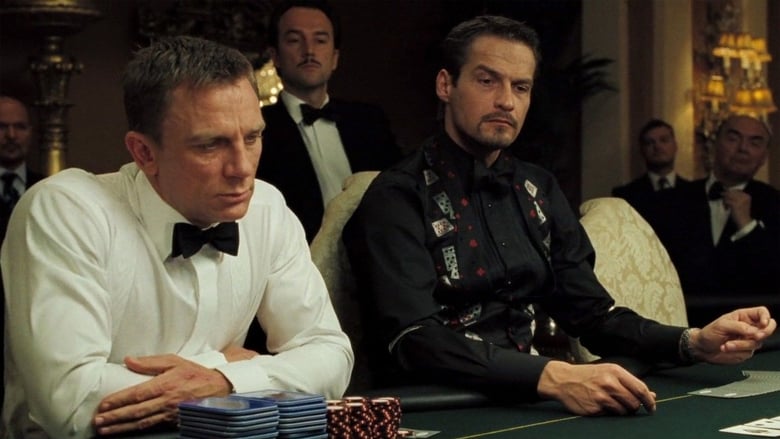 James Bond is back. Thank goodness.

I'm a fan of the first Bond movies, meaning all the Connerys (OK, not counting Diamonds are Forever) and the Lazenby plus the first few or so Moores. By the '80s I was done with 007. I actually didn't mind Dalton in and of himself, but he was in two pretty witless and dead entries. Then came Brosnan, and apart from liking his first outing OK, they quickly degenerated into ridiculous videogames full of patently impossible CGI nonsense and cartoon characters. For me, the more Bond is rooted in a bit of reality the more fun I have with the movies. The last four Brosnan Bonds were increasingly unwatchably dull to me. So I could only hope that when they signed on Daniel Craig as the new Bond that they would also reimagine the tone and overall texture of the franchise.

Happily, Casino Royale is a Bond reboot. Much like Chris Nolan's Batman Begins, we're more or less starting over. The movie opens in black and white and we witness the first two kills that earned ol' Jimmy B. his 00 status. From there it's one of the best of the playful and intricate credit sequences and then we meet our new Bond. This is a Bond in a post-9/11/01 world. There are no gadgets, save for cellphones and wirless communications, and while 007 has deluxe models it's the same technology you can get at Radio Shack. He drives damn nice cars, but they don't turn into submarines and aren't outfitted with surface to air missiles. There are stunts and action sequences and gunplay for sure, but while exciting and well choreographed it never crosses the line into complete and utter comic book make believe. There's no Q and no Miss Moneypenny but Dame Judi Dench is back as M and even CIA man Felix Leiter shows up for the festivities. The plot isn't concerned with a super weapon or a plot to take over the world but stopping the funding of international terrorist activities. So how is Craig as Bond? He's a tougher and more brooding agent, but his steely lowkey demeanor and rock-hard body are perfectly suited for this newest take on Bond. He can flash a little roguish charm when necessary, and he looks great in a tailored tux, but his response to a bartender's question of whether he wants his martini shaken or stirred, both the words he uses and his tone of voice, tell you all you need to know about this 21st Century James Bond. And this guy bleeds and bruises, which turns him back into a human being from the superhero he had become in the past thirty-some years.

The director, Martin Campbell, helmed Goldeneye, the only one of the Brosnan Bonds I can stomach. Early in his career he also helmed the excellent mini-series "Reilly: Ace of Spies" starring Sam Niell as a real-life British superspy. Casino Royale is still a fantasy, no doubt, but there's more Reilly in him than he's had since the 1960s. Eva Green, who was so damn sexy in Bertolucci's The Dreamers, is well cast as the woman James may actually be falling for during this assignment. Mads Mikkelsen is fine as the main baddie, and while his histrionics while playing cards are probably the most cartoony aspect of the whole movie, the torture sequence later in the film is anything but. The other supporting players aren't called on to do much, but that leaves more time to define our new Bond. The movie runs two and a half hours and while there are some wonderful action setpieces, the downtime in between them is not spent looking at your watch wondering when the next explosion is going to liven things up.

Without the gadgets, without the cheeky one-liners and without over-the-top impossibilities in action and plot, I gotta say I loved this James Bond. It really harkens back to the Connery Bond of Dr. No and From Russia with Love. He's been updated, as has the world, but overall this more "realistic" (that term being relative in comparison to say outrunning a giant laser beam that is bringing down an Arctic palace constructed entirely of ice) Bond is exciting, engrossing and still plenty of fun. Taking the camp and X-Box stuff out of it totally brought me back into the Bond fold. I can hardly wait for the next installment.