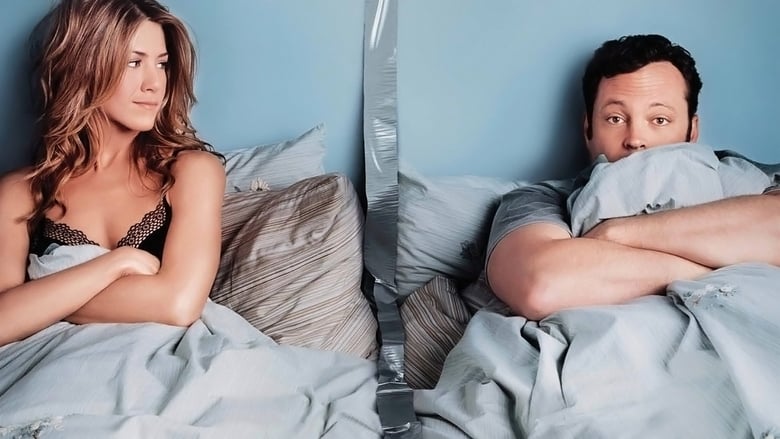 
Pushed to the breaking-point after their latest, "why can't you do this one little thing for me?" argument, art dealer Brooke calls it quits with her boyfriend, Gary, who hosts bus tours of Chicago. What follows is a series of remedies, war tactics, overtures and underminings suggested by the former couple's friends, confidantes and the occasional total stranger. When neither ex is willing to move out of the condo they used to share, the only solution is to continue living as hostile roommates until somebody caves. But somewhere between protesting the pool table in the living room, the dirty clothes stacked in the kitchen cupboards and the sports played at sleep-killing volume in the middle of the night, Brooke begins to realize that what she may be really fighting for isn't so much the place but the person.
The Review

As much as I love Vince Vaughn, this movie sucked bupkis. It calls itself a comedy but there was so much real pain and angst that it was more like a family drama with a little comedy thrown in - that fell flat more often than not, just wasn't funny, or wasn't funny enough.

I'd actually watched Just Friends earlier in the day on DVD then gone to see this and it was a ruler that helped me pick out the missing pieces that would have made this movie funny.

The gist of this flick is that Vince is stuck in his ways and oblivious to others needs or feelings. You see that when he meets Brooke - he pushes himself on her and won't stop until he charms her out of her current dating scene and into a relationship. Then you get a huge montage over the credits of the two of them in day to day life, scenes of kissing and hugging, posing and laughing, where they're getting along with all their friends and each other like bees and flowers. All's good in the world.

The movie opens, you see her performing her job at an art gallery, and him out during his day running Chicago tours - a core difference in them shows a lack of appreciation for art and the finer things in life on his end, and a beautiful home that she has built, upkept, and overseen for the length of their time together. Gary wants a pool table, and she argues with him that it's not appropriate or right to have in a place so small. You can tell Gary doesn't give a damn about art, but that Brooke has time and again compromised on her own interests to share time with Gary doing the things he likes to do - bowling, going to Cubs games, down home sorta stuff. They don't go to plays or opera, or the ballet, or eat fancy dinners out - they don't do anything together any more that isn't something he wants to do. They don't go to movies, to the park, or travel on romantic trips - it's like they've been married, and the bloom has faded. Brooke spends her time cleaning up after Gary, nagging him constantly, because she's not happy and wants a change. Gary doesn't see anything wrong with himself or the relationship, and wants her to quit nagging him and let him be.

They have a big fight - and Brooke throws the gauntlet down - I can't do this any more. She doesn't discuss it, however, or explain, she just leaves the room. Gary only hears that they've broken up, and makes no effort to change it or ask why or fix what's broken. We have no idea why, and from the outset, because we don't have a true sense of love that USED to exist between these people (a montage is simply not enough) we do not buy what happens later or care as much as we'd need to to make this movie work.

As the movie progresses, you see each side of Brooke and Gary's families and friends, who watch wide-eyed and awkward as the two snipe at each other in restrained tones until they get to the point of yelling and verbally attacking each other. They split their friends up, and everyone's in the middle of a war zone with them.

It becomes painful and exceedingly too real - Brooke's best friend is tired and put upon and disappointed in Brooke's choices as she tries to get Gary to change and come back to her and the relationship as a new man. Brooke forges on, desperately thinking up ruses and tricks to make Gary feel like he's losing someone amazing and clean hs act up. Gary retaliates, and their acts, trivial and amusing and perplexing at first, become extremely cruel and deliberate, and painfully real - at one point Gary throws a poker party at home that crosses all boundaries. At this point you know the movie is way off the comedy scale and deep into drama.

Only when Brooke breaks down toward the end of the film does she seem to get what she's done wrong, and does he seem to get how badly he's hurt her and the relationship. The film has spiraled so far down into hell though that it doesn't matter if it takes the following stand - Gary is actually at fault as his friends admit to him that Brooke is trying to fix key parts of his personality that everyone who knew him before her knew he'd never change. Shocked, Gary takes stock and tries with way too little too late to do what Brooke was trying to get him to do - but she's done, realizing that she doesn't have the energy any more to do all the work. This whole movie was her fighting cruelly and pettily for something he couldn't bring himself to fight for, too.

And who the hell wants to watch that? This is the core problem with the movie - if it's going to be a drama, then people have to mutually learn lessons, talk through things thoroughly (outside of the fighting, with friends and family), and grow and change. Brooke did not seem to grow and change, only grow tired and fed up. Which was not fun to watch.

Gary didn't actually seem to get anything until way too late and as it's shown in the film he does some basic tasks as though that's going to be all that's needed to fix what's integrally wrong with him - quick fixes won't do it. If you're a drama, you know that. You also know that if this is drama and real, then Brooke would never have moved in and bought a condo with a man who doesn't make overtures and compromises out of love for her, who makes it all about him and discounts and disrespects her. You know that she would have seen that coming from a mile away and wouldn't have gotten in that deep in the first place. You also know that Gary wouldn't have gotten in that deep with a woman so anal and Type A who doesn't leave him alone when he gets home and isn't all uptight about having table centerpieces for family dinners.

And if you're a comedy, you would NOT EVEN HAVE TAKEN IT THERE. That's what was so painful and annoying. Why are you going to drag me into this dark hole in the first place? You want us to relate and laugh, not suffer and squirm. If you're going to have friends and family involved let them be over the top, let them interact, let them take the pressure off so we're no longer squirming. Instead, there's one goofy brother who wasn't even that funny. There's Gary's best friend who switches from funny to unfunny, and even Vince is taking it way too seriously. The supporting cast needed to do more, and Vince and Jennifer just kept missing it - the whole movie seemed an example of bad timing and lessons NOT learned (plot wise) and it was demonstrated by the acting and the script - Jennifer and Vince keep trying to be funny when they aren't, and not being funny when they should.

As shown in Just Friends sometimes you need the zany and wacky to help bring out that positive chemistry that makes the audience relax and flow with your film, enjoy it and relate to it. This film keeps dragging you deeper and deeper into the suffering of two people, until all you can think is - BREAK UP ALREADY AND LEAVE. You stop caring whether they work it out, you just don't want to watch them fight any more! What kind of comedy is that? It's not that you hate Brooke and Gary, it's that they are TOO REAL and you don't want to watch two real people fight, you don't want to be in the same position as their friends and family sitting helplessly by watching something fall apart, and fall apart nastily.