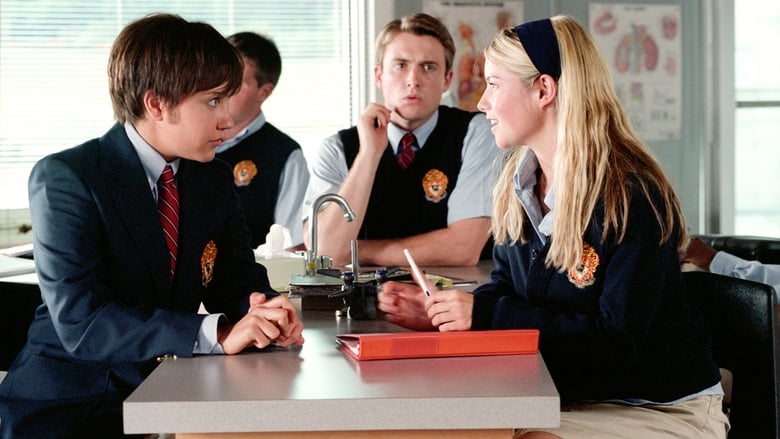 
When a teenage girl, Viola, discovers that her soccer team has been cut from her school, she disguises herself as her twin brother and takes his place at his new boarding school for two weeks. Comedy ensues when she falls in love with her new roommate, Duke, and finds herself the object of affection of the beautiful Olivia, the girl whom Duke loves. Things get even more complicated when her twin brother, Sebastian, finally turns up...oh wait. This film was made over 11 years ago. It's called Just One of the Guys. My mistake.
The Nutshell

My friends and I enjoyed it for the cheap thrills.

Target audience is clearly high school, high adults, or people looking for silly movie time. Teen girls, take your girlfriends to see this, don't bother if you're a boy (unless you're trying to win makeout points). Has some hot flesh (male and female) but since it's targeted to girls, more male than female. Has some sweet moments, some funny moments. Is often filled with painful awkward moments (if you love awkward, a la Seinfeld, enjoy). I can't stand them, so I literally looked away groaning.

It's amazing how a girl can be so attractive as a girl and oddlooking as h*ll as a male. I'm sorry, but Amanda Bynes does not compute well here.

There are a lot of things that don't compute well, but if you're looking for a couple laughs, some nice shots of boys with hot bods in locker rooms, this is your "waste brain cells and veg out" flick.

I'd like to note that there was an 80s flick with the original storyline that I feel told it much better. Seriously. The chick in this one ONLY showed her breasts, no penii were exposed, and there was no twin or literal usage of Twelfth Night character names, but I feel they did it much more compellingly. In that one, the chick wanted to be a reporter for the school paper and made a far more convincing male in looks and behavior.

EDIT: I found a synopsis that cites the flick from the 80s! Just One of the Guys

This flick uses stereotypes like crazy and is not as witty as flicks like American Pie and such. Lots of physical and situational stupidity and goofiness. The parents of our heroine are idiots, her twin brother looks nothing like her male version and yet, everyone believes she's him, even those who know both of them. There's even a horrible situation in which Viola runs all over a fair switching back and forth between male/female multiple times in the space of ... what? A real life hour? Nuts.

I do like the motif of "girls can be just as [email protected] as boys and don't need to be debutants, have a boyfriend, or the manners of a princess" although, sadly, they undermine this with our heroine turning into a better soccerplayer because her new male friend teaches her the ropes. BAH. If Viola's so evolved WHY is she attacking Olivia in a catfight because she's chasing after Duke? Oh, we need a girl smackdown fight for the boys who brought their girls to see this movie. I shake my head for poor Shakespeare.

Other than this, Bynes is generally really goofy and good at the "male doofus" behavior, which is kinda cute to see. She proves a nattier mind than her poor mother (sad, I know).

And the UK Soccer Coach gives some believability to the football playing. Eunice is a great be-braced character, so intense with longing and freaknerd hunger she TREMBLES! Ugh.

Bring booze if you can. I did.