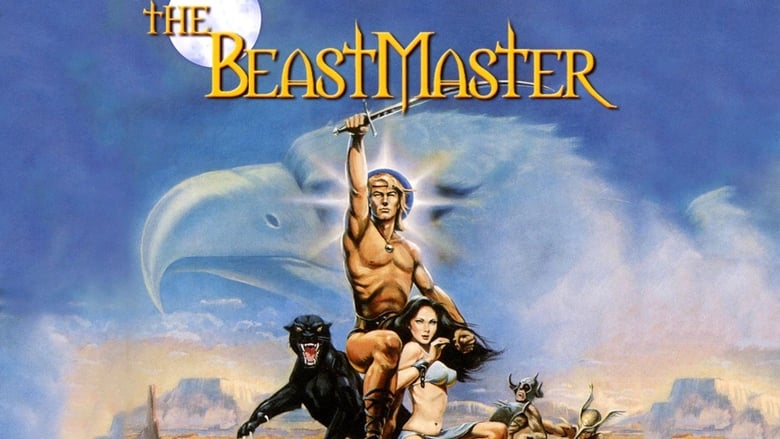 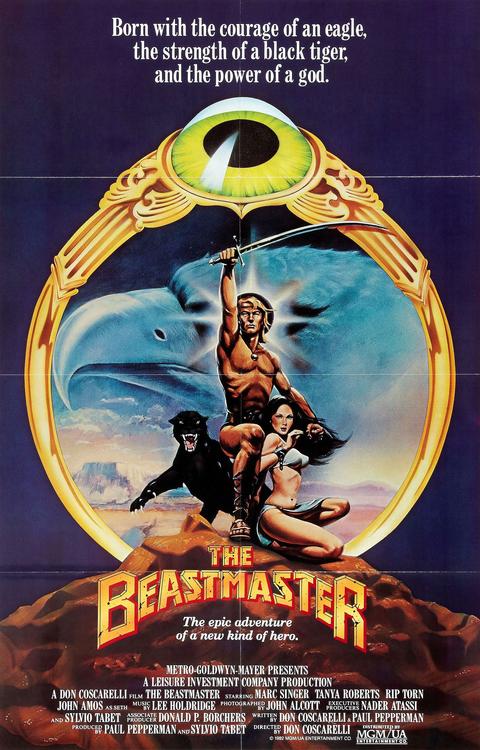 The second in my Sword and Sorcery Double Feature (with Conan The Barbarian), we revisited one of my childhood favorites, Don Coscarelli's The Beastmaster. Released just a few months after Conan, Coscarelli had to make do with less than half the budget that Milius had for his film, but the plucky Phantasm director did not let the audience down.

The film starts as a straight-up Period Horror (Coscarelli's knack for the genre is as obvious here as it was in his previous film) as an evil priest, Mayak, and his coven of witches use dark magic to steal the unborn child of the Queen (and King) from her belly and transfer it to the womb of a cow. This effect is excellently executed and this fire-lit magic by the witches sets a dark and Horror-tinged tone for the film. 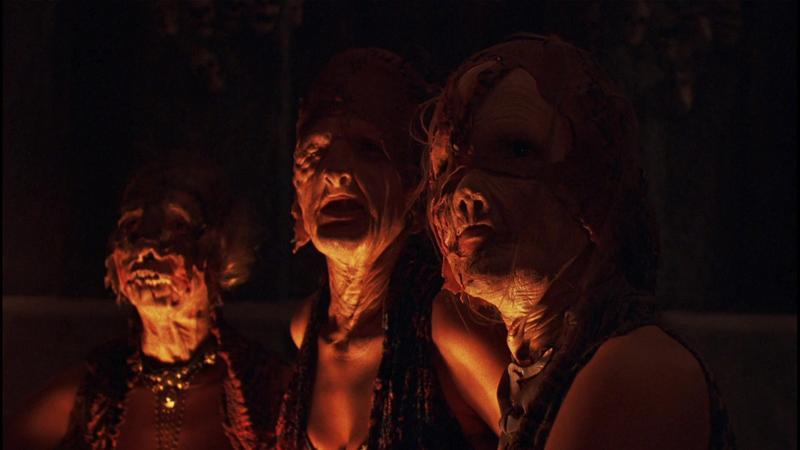 One of the witches cuts the babe from the cow's abdomen and prepares to sacrifice it, part of a prophecy to solidify the priest's absolute power in the kingdom, but the plan goes awry as the child is rescued from the witch by a brave villager. In the coming years, as the villager teaches the boy, Dar, to fight and be a man, his connection to animals, due to his time in the cow's womb, is revealed. "I see through their eyes, they see through mine. They know my thoughts and I know theirs." This comes in extremely handy throughout the film.
Unfortunately, the priest, Mayak, has allied himself with the dreaded Jun Horde, which sweeps across the landing taking everything in their path, with Mayak searching for the lost child to end the prophecy. Dar's village is destroyed and everyone but him is killed. 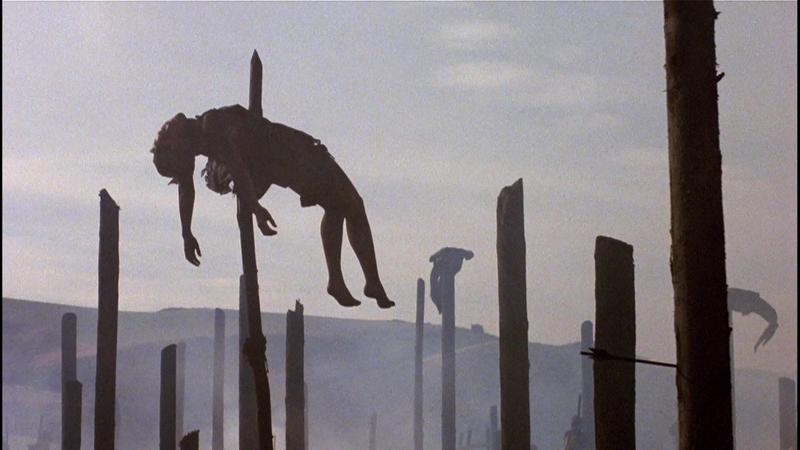 So, Dar, knowing nothing of the prophecy, his royal birthright, or his place in the World, sets out on a quest to find the Jun horde and... well, it's not really clear what his plan is once he finds them, considering there's like hundreds or thousands of them or something (Coscarelli does a great job of making a little seem like a lot all through the film), and their leader is this terrifying motherf*cker. 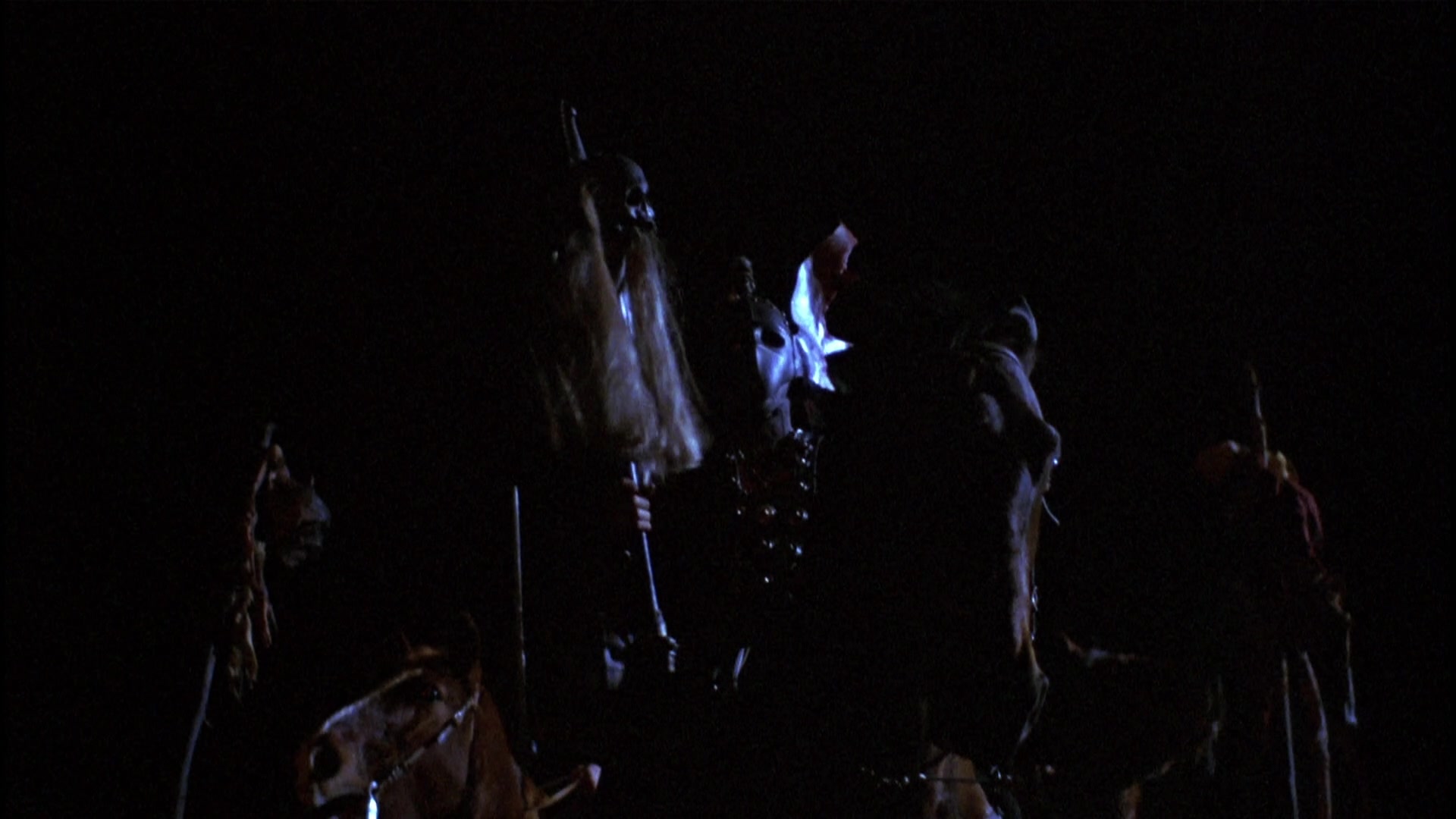 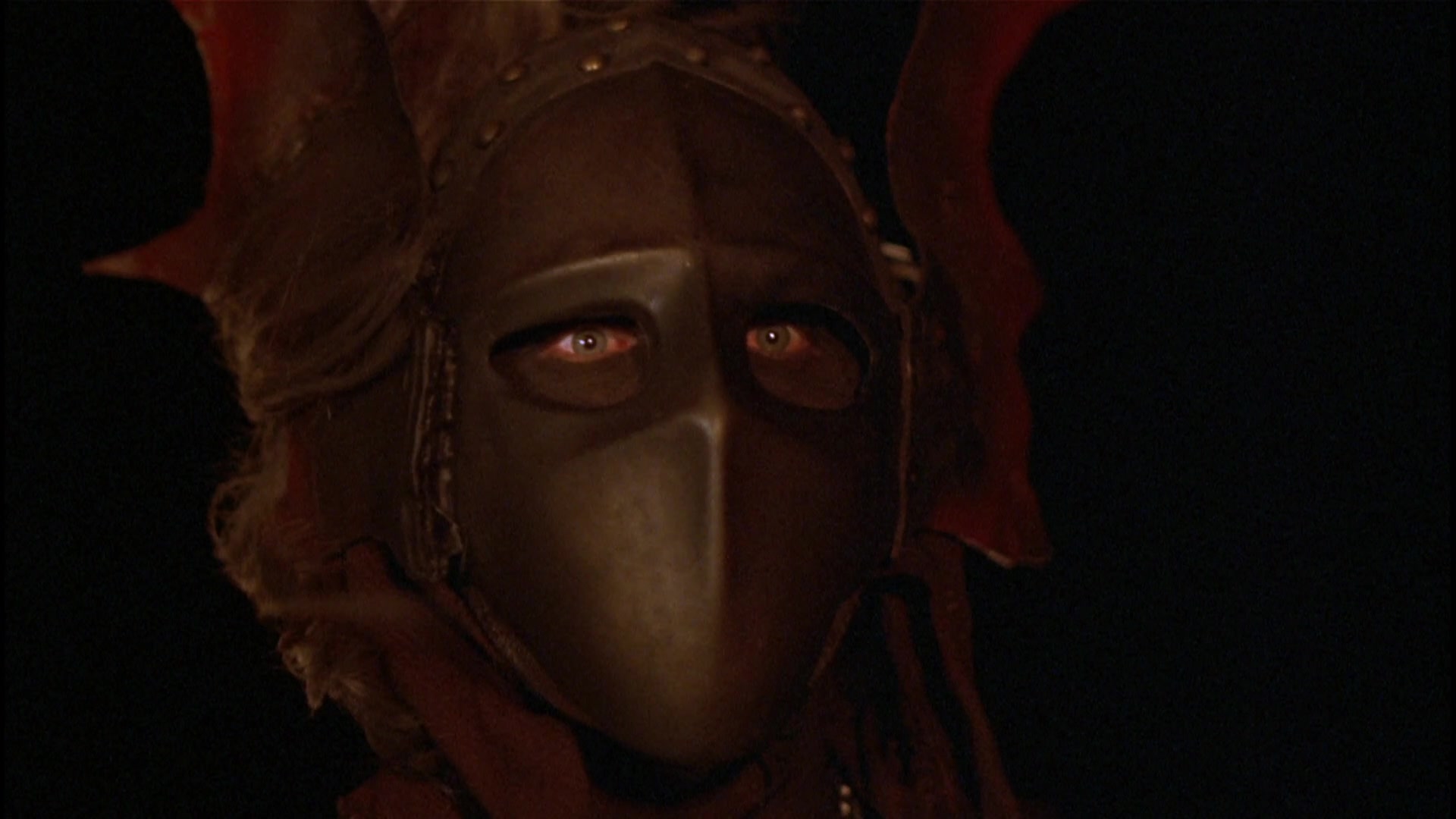 Yes, The Road Warrior permeates even Sword and Sorcery movies of this time, but I tell ya, when I was 10 years old, I thought the Jun Leader was about the baddest mother on the planet this side of The Lord Humungus and maybe more so.

Along the way, Dar will gather a cast of characters, both animal and human, around him as his quest is sidetracked by his encounter with Mayak at the Temple of Aruk and the revealing of his true destiny. Not to mention he basically just drops everything to follow Tanya Roberts around. Seriously, he absolutely drops his entire quest like 15 minutes into it after he sees Tanya Roberts' eyes. Her function in this film is to have beautiful eyes and drag our hero into his own unknown destiny. But mostly to have beautiful eyes. This was supposed to be Demi Moore but the executive producer overrode Coscarelli in favor of Roberts, so I guess he got mesmerized by these peepers too. 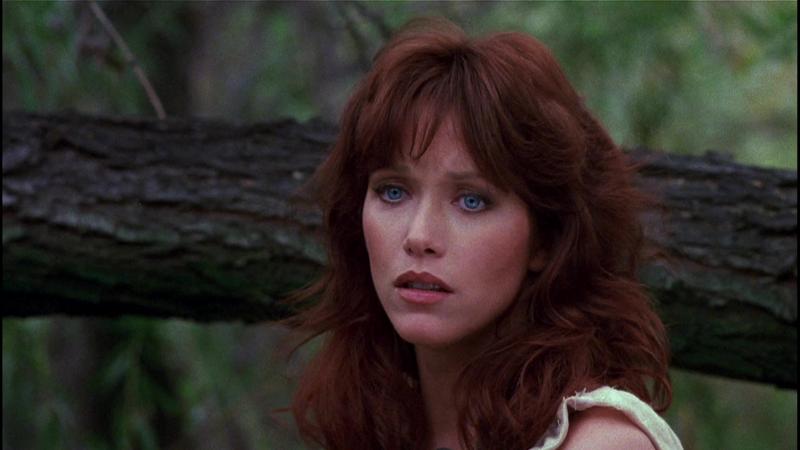 But it is his chance meeting with John Amos' Seth that will prove to be the most important for the movie. Everything's going along fine, trust me, but the movie needed another tentpole and Amos provides it. He has a commanding presence and flip between a withering intensity and a winning good-humor in the blink of an eye. Really, it's kind of a shame we didn't get more of him in cinema. 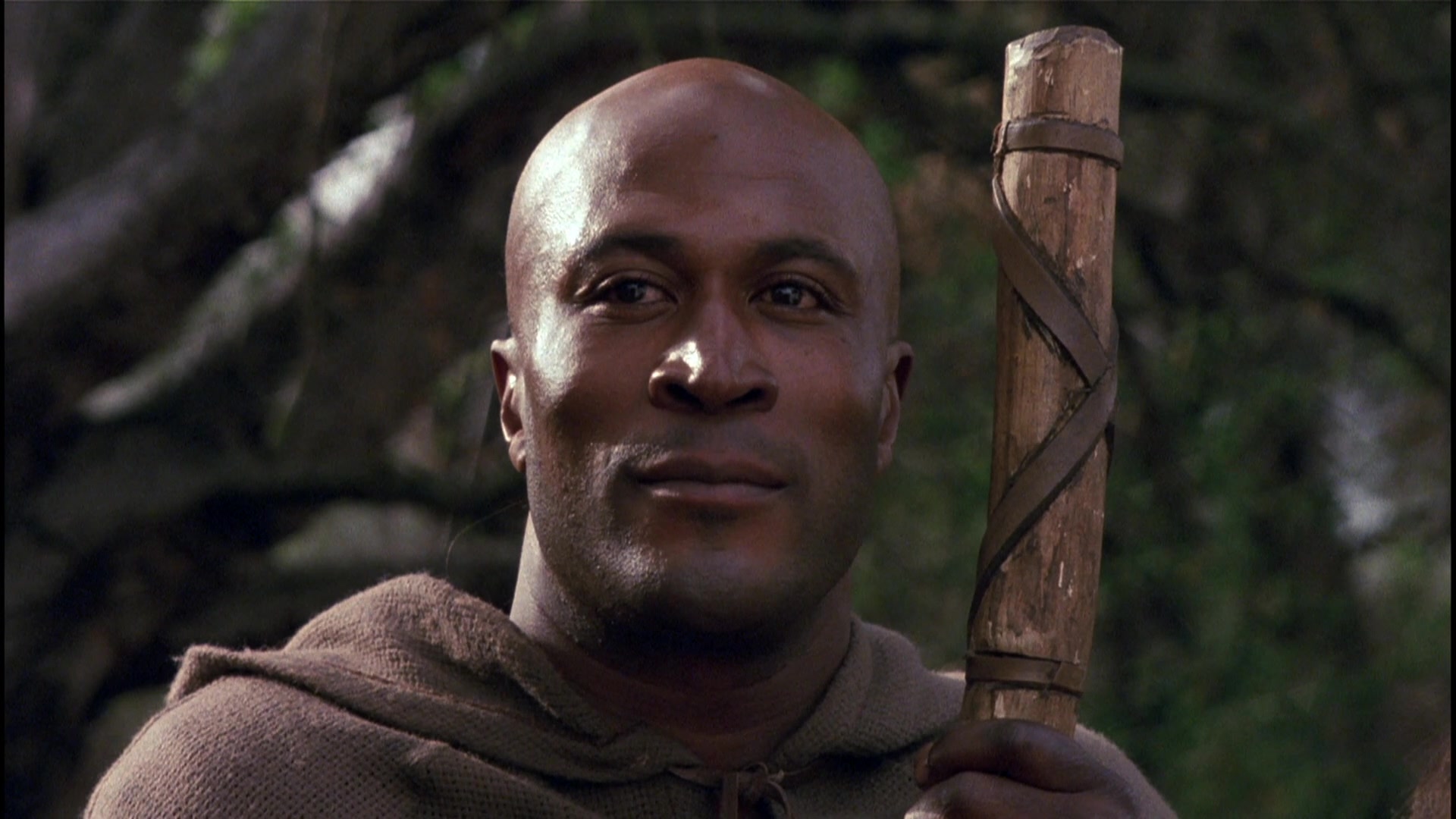 Ultimately, all of this comes together extremely well under Coscarelli's direction. All of this really works and the film, again as I love to say, punches well above its weight, delivering a tremendous amount of imagination in a surprisingly credible way for the time and budget. Coscarelli makes the most of what he has here, in fact, one of my favorite shots of the film is this forced-perspective miniature he brazenly hovers on as if to say, "Yeah, we couldn't afford to build a whole city and we thought a matte would look stupid, so here, we made this for you, enjoy it." 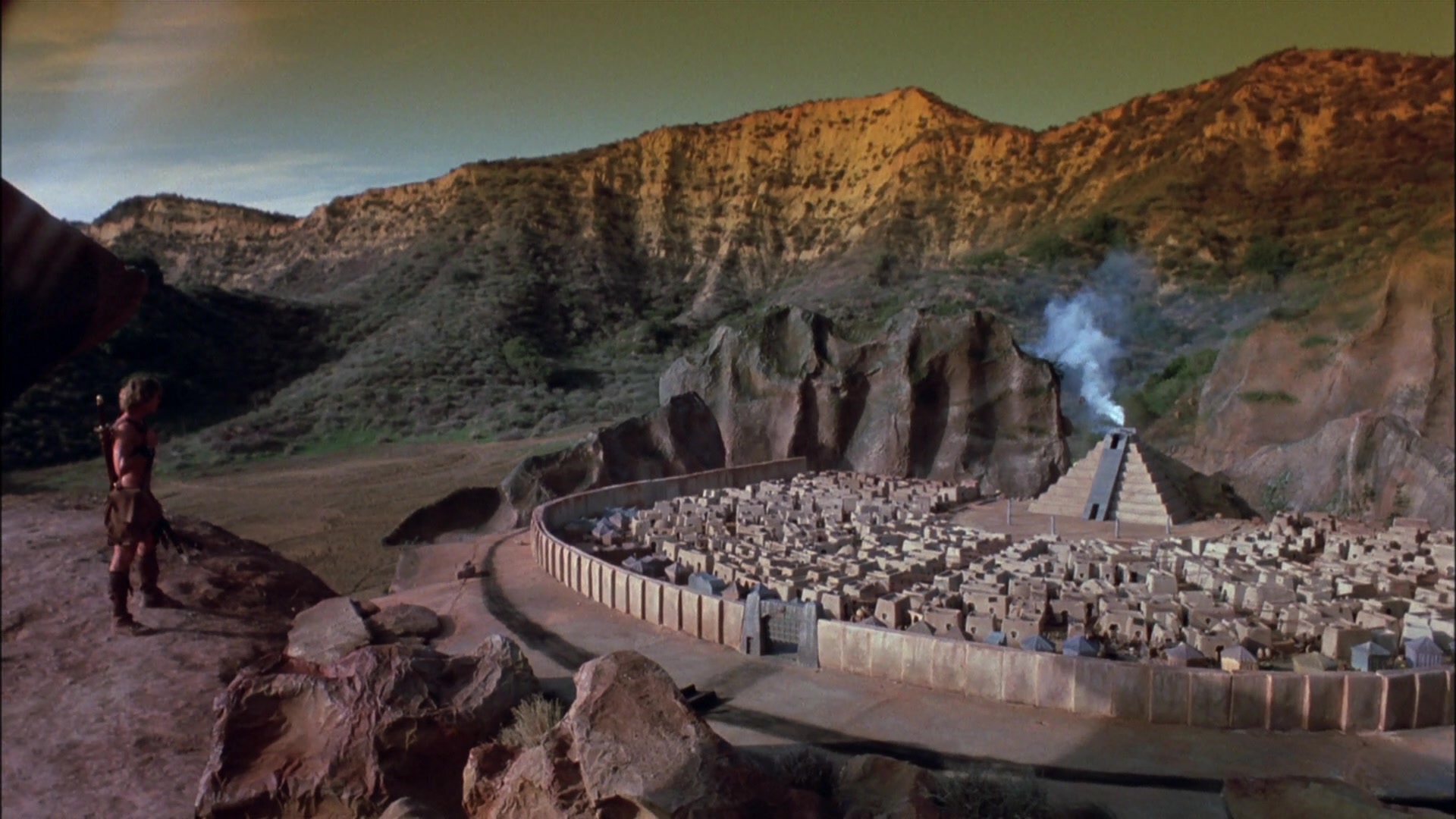 I mean, you gotta respect that, right?
And the funny thing is, the movie has a lot more to offer, still. To describe this film and not include the wonderful set-piece with the bat-winged people that worship the eagle (lucky for Dar) and liquify their prey, would be folly, and it again illustrates how frequently Coscarelli flirts with Horror in this film and how much that benefits the picture. 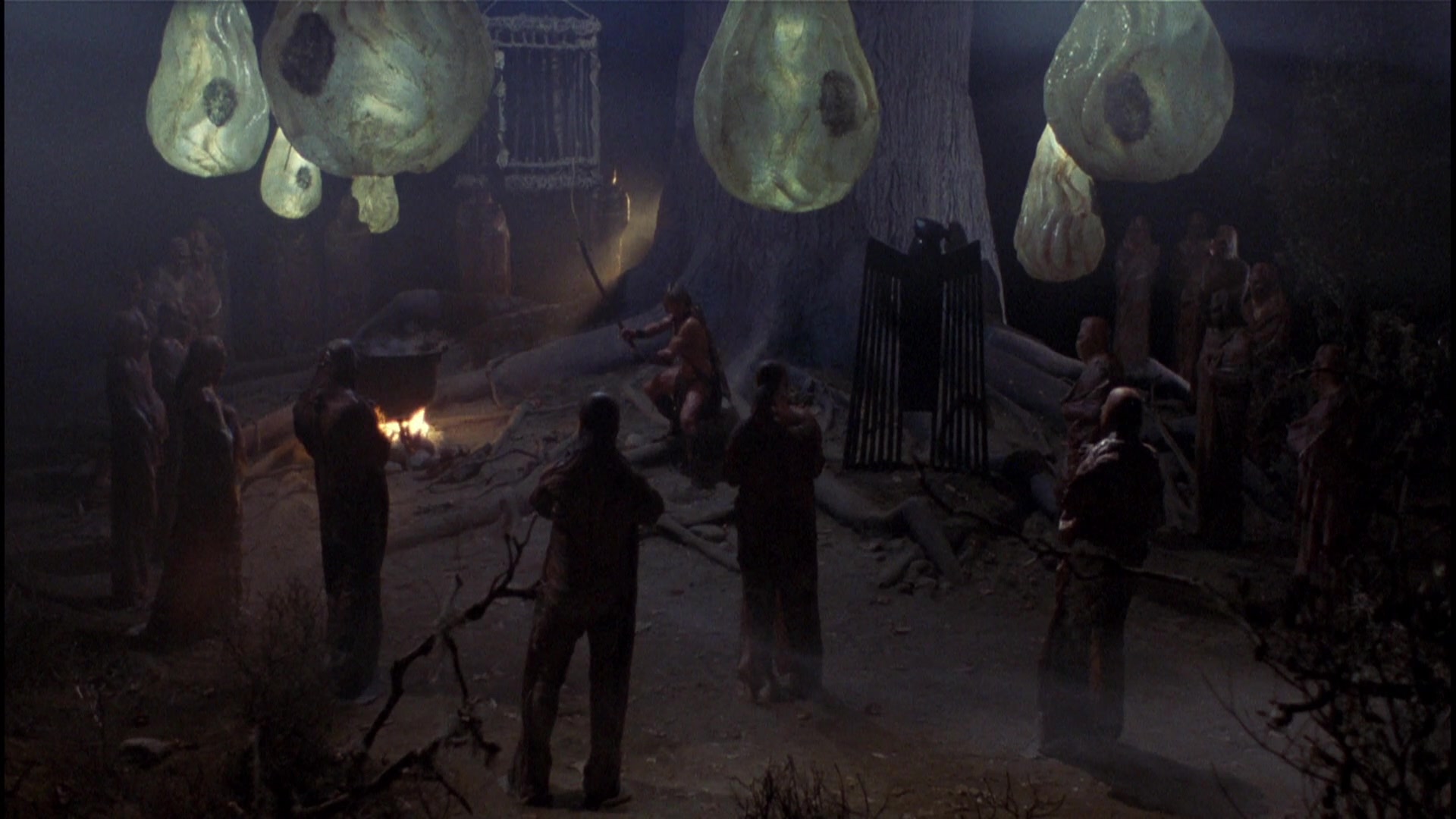 And my friend, Trout, who was extremely reluctant to watch the film and had to be bullied into by his wife, Amy, and I, ended up being won over by, of all things, the animal-wrangling of the film. I mean, a golden eagle just comes in and lands on Dar's forearm on queue. A huge black (air-brushed, I guess) tiger chases actors through the forest, drags people to the ground in-frame, and trots right by and gets a pat on the butt. And then there's Kodo and Podo, Dar's "two thieves", who do all kinds of shit in this movie just totally credibly, no puppets or anything, just two ferrets here owning the movie. 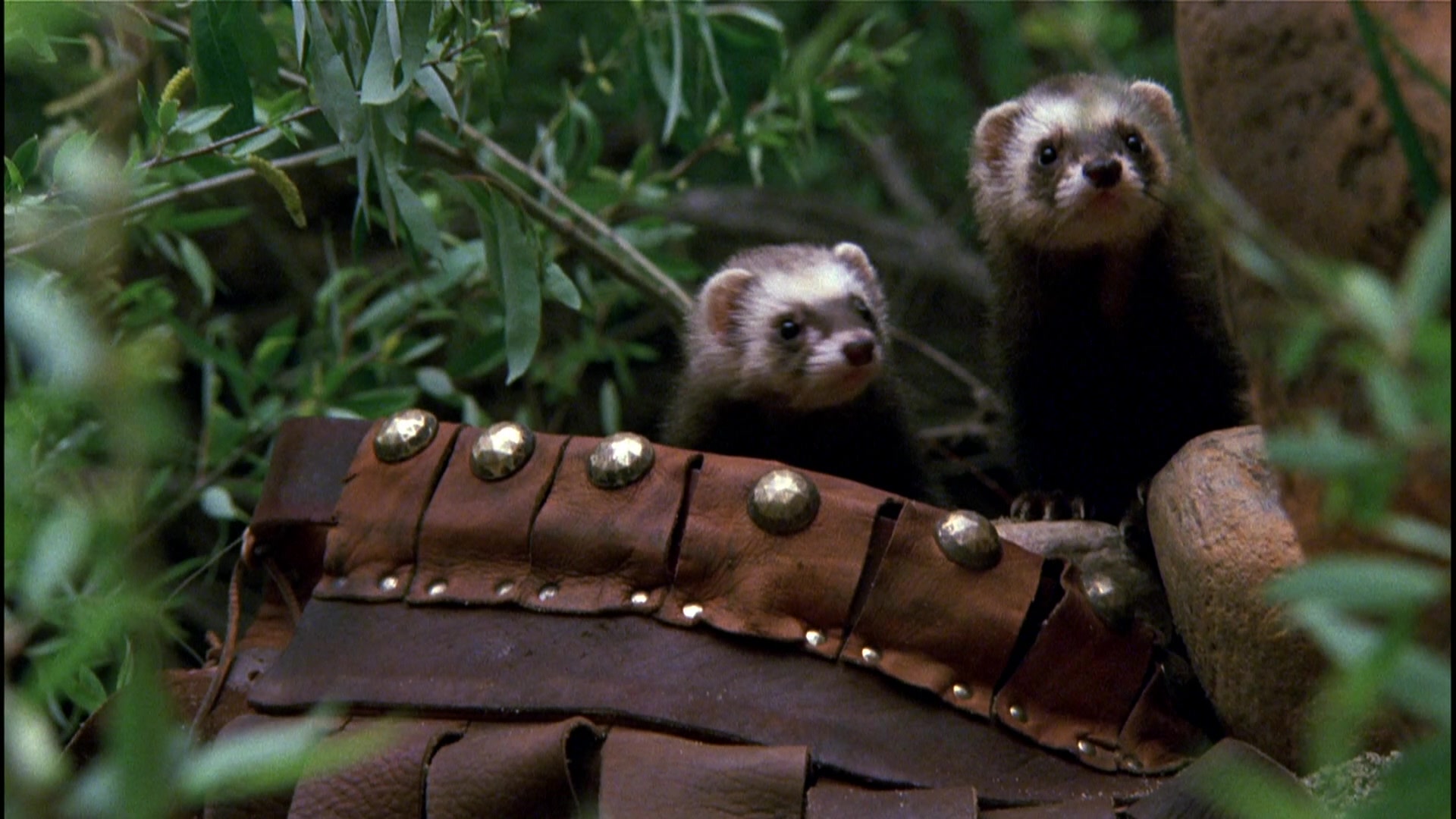 Really, I could go on and on. I didn't even mention the Death Guards. Or Rip Torn's Mayak. Or the actual star of the movie. But the film just has a lot to offer. Great set-pieces, lots of exciting action, interesting actors, that great Horror vibe, pluckiness, it just goes on and on. Frankly, I think this is Coscarelli's best film. I highly recommend The Beastmaster.