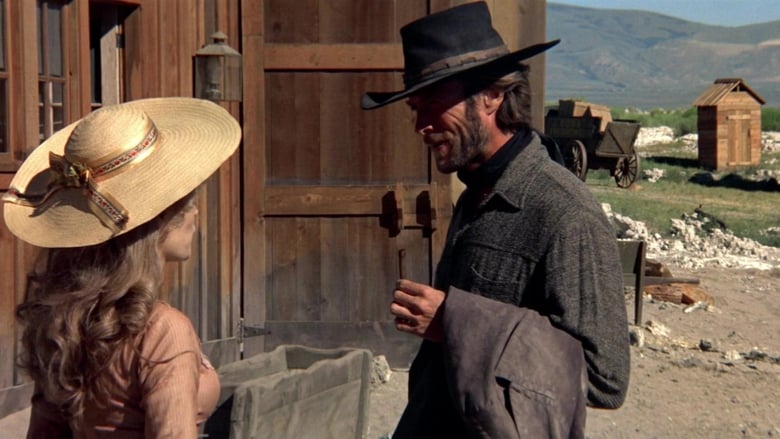 by JPRetana
posted on 9/17/22
in
High Plains Drifter

The Stranger puts the 'anti' in anti-hero, and takes out the 'hero' while he’s at it. Director Clint Eastwood opens the film with an intriguing — nay, baffling, staggering, head-scratching choice. A nameless gunman arrives in the mining town of Lago (where precious little mining takes place) and kills three men and rapes a woman.

The three men arguably had it coming; as for the woman, the Stranger soon has her coming. So, it’s not rape if she has an orgasm? Is that what you’re trying to tell us? This is a development in hemingwayan morality that even Papa Hem didn’t see coming: it’s okay is she feels good after.

The following day, the woman shoots at the Stranger while he’s taking a bath. Re-emerging (somehow the bath water protected him from the bullets), he wonders "what took her so long to get mad." The sawed-off imp that’s to become the Stranger’s sidekick replies: "Because maybe you didn't go back for more." Really? You think she’s angry because she wanted to be raped some more?

The entire town turns a blind eye, dismissing the woman’s cries for justice as "hysterics." No wonder the Stranger attacks another woman later on; she puts on a perfunctory fight, but when the movie cuts to the morning after, she has fallen under the spell of his magical penis, telling him "Mister, whatever you say is fine with me." Uh-huh.

Even 50 years ago, Eastwood should have known better than this. By way of comparison, the Man with No Name is amoral, but he’s not immoral — when push comes to shove, he’s still the 'good' in The Good, the Bad and the Ugly. The Stranger, on the other hand, is just plain ugly. I’m not saying he should be a saint, but he should at least be better, or at least not as bad, as the actual villains — but since rape is arguably the least heroic act possible, and he’s the only one who commits it, the Stranger is by far the worst person in an entire film filled with questionable characters. Why does he, then, ge to ride off into the sunset?

It’s a damn shame, because the movie itself is rather intriguing, in the good sense of the word. The town hires the Stranger to protect them from three outlaws who just got out of jail bent on revenge for real or perceived wrongs done to them.

As payment, the Stranger is given "unlimited credit ... An open charge account with no reckoning" (he takes the opportunity to buy candy and blankets for some Indians, as if that made everything else all right). The Stranger takes the offer to heart, and paints the whole town red. Literally.

This is part of his plan for an ambush, which also includes staging some sort of large, phantom picnic. It’s all quite surreal — spooky even, considering the film’s parting implication as to the Stranger’s true identity. I wish Eastwood had focused on that aspect of the plot; the outsider taking advantage of the wicked town, playing mind games with the cowards who run it, like some sort of Old West Pied Piper. Unfortunately, the lingering stench of that nasty rape business is too acrid to let us enjoy the movie in peace.
» More about High Plains Drifter
» More reviews of High Plains Drifter
» More reviews by JPRetana