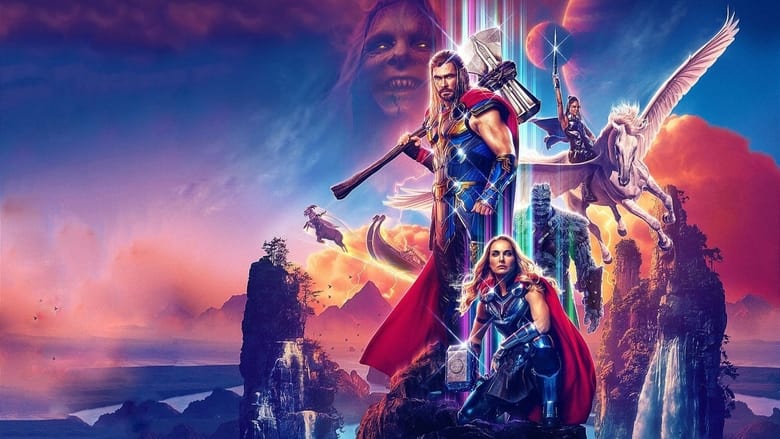 The third Thor sequel is not the shot in the arm to the MCU that Ragnarok is, but I still had a fun time with it and believe that it shares that entry's appeals. Like that movie, many of them result from Taika Waititi's imagination and sense of humor. His direction adds spontaneity and unpredictably, which at this point this franchise could always use more of. When the movie gets serious, however, it tones down the silliness before you even realize it, which is a feat worth calling out since the story covers deicide, child abduction, severe illness, i.e., some not so funny stuff. While Waititi deserves credit for this, the cast does as well, which besides the regulars who could play their roles in their sleep at this point features the return and addition of some familiar faces. The main returner is Natalie Portman, whose Jane Foster I and a lot of people don't love in the first two Thor movies, but her turn in this one improved my opinion of the character. Christian Bale also elevates his role of Gorr beyond what could have been a stock villain, and Russell Crowe's turn as the hedonistic and less than helpful Zeus, which could be my favorite performance in the movie, is another one of his strange - that's the good kind of strange, mind you - supporting roles. My admiration for the performances of course has to do with how good they are, but since I haven't been a regular theater goer in over two years, the family reunion-like appeal of simply getting to see actors and actresses who I've spent much of my life watching made their appearances even more special. As for the visuals, if the cool and unique look and feel of Thor: Ragnarok made you excited about this entry, they won't let you down. I especially like the look of the Omnipotence Realm, which is the home of Gods like Zeus and Quetzalcoatl, which manages to mash up ancient Rome with a metropolis like Akira's Neo Tokyo. There's also a fun ride through space featuring flying whales that would neither be out of place in a modern Star Trek episode nor on a Lisa Frank notebook cover.

Despite having a good time, I wish my enjoyment were more substantive. It's closer to the appeal of downing a box of candy - which I proudly did during the movie - than the appeal of a full course meal that the MCU's best entries like The Avengers, Captain America: The Winter Soldier and again, Thor: Ragnorok have. This is partly due to the action, while exciting overall, has too many fights involving obviously CGI and thus weightless monsters. Also, the middle, despite some visual tricks like a shift from color to black and white, drags so much that I almost nodded off. With that said, the main culprit is my current impression of the MCU, which is of an album I finished listening to, with this movie and the others that have come out since Avengers: Endgame coming across like demos or bonus tracks. To be fair, we didn't know what the MCU was leading up to when it started way back in the late 2000s, so the problem may be that whatever the goal of this phase may be, it doesn't matter to me that much. As my indifference to outright contempt for the DC League of Super-Pets and Black Adam trailers indicates, the problem may be that every superhero movie these days might as well be a demo or bonus track. I don't know what the next prevailing trend in the movie industry should be, but I'm very much ready for another one, and as much as I've enjoyed the MCU, I'd probably just shrug if Thor: Love and Thunder was the last one for a very long time. Again, I did have fun, and if you also look forward to anything with Taika Waititi's name on it, this movie is bound to maintain your enthusiasm. I just wish that fun didn't have to be so superficial or tinged with a longing for something different.
» More about Thor: Love and Thunder
» More reviews of Thor: Love and Thunder
» More reviews by Torgo