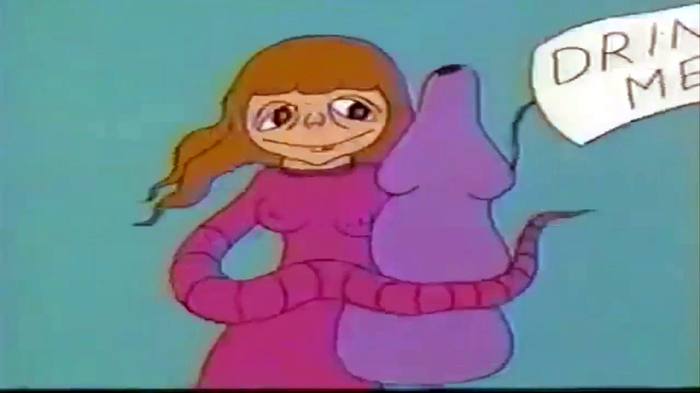 "Alice tasted it, and finding it very nice ... she very soon finished it off."
That is a direct quote from Lewis Carroll's iconic novel Alice's Adventure in Wonderland. Alice goes down the rabbit hole, ends up in a hall with a small door, drinks the potion and shrinks so he can fit through the door. But this is not Carroll's "wonderland", but rather something... stranger.

Malice in Wonderland is a short film directed by Vince Collins *loosely* inspired on Carroll's novel. It takes ideas from its narrative and presents them through a series of bizarre, trippy, and sexually charged visuals and sounds that include fluids, appendages, vulvas, screams, and laser sounds.

The animation style is extremely aggressive and in-your-face with a non-stop flow. Even though it borders "closely" to sensory overload, there is still a hypnotizing quality to it all. It is also nice to recognize how Collins and graphic designer Miwako interpret the different elements from Carroll's story, like the Cheshire Cat, the Queen, the Rabbit, etc. in their own way.

There's really not much to say about it. If you're into a visually arresting, dizzying, yet mesmerizing experience, then taste it, and if you find it very nice, maybe you'll finish it off.