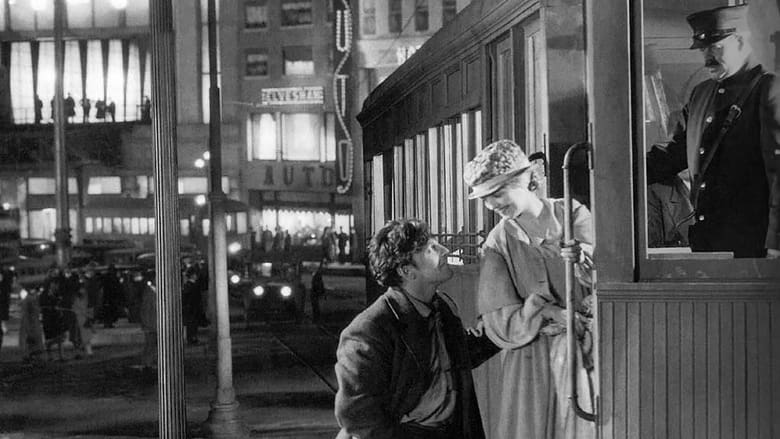 In this silent film, a man (George O'Brien) is seduced by a woman (Margaret Livingston) visiting his town on vacation. When the woman convinces him to do away with his wife (Janet Gaynor), he agrees. But when it comes time to do the deed, the man cannot go through with it. Following his wife to the city, the two reconnect over the course of the day. But tragedy may still be in the cards for the couple.

Another one of those movies that almost everyone considers a great film, and I find myself perfectly inclined to agree.

This is a film that repeatedly excels at efficiently getting to the heart of an emotion. Whether it's a pulse-pounding sequence of the man rowing his wife out to the middle of a lake while their frantic dog howls inconsolably, or a quietly sweet moment where the couple watches as a young man and young woman get married in a church, this movie has great emotional frequency. And there's a tremendous range of emotion as well, ranging from drama and tragedy to borderline slapstick comedy as a man repeatedly "fixes" the falling shoulder straps of a young woman in a dance hall.

There's also just a really gorgeous look to the film, and while I'm not sure "impressionistic" is the right word, I loved the way that the style of the film seemed to follow the emotions of the main characters. In one sequence, they stare into each others' eyes and the street behind them dissolves into beautiful flowered woods . . . . until they come back to reality and the cacophony of honking cars as they have walked into the middle of the road to kiss.

I suppose the only real sticking point for me is the fact that, you know, this guy planned to murder his wife. The story has a borderline folk-tale sensibility, so this wasn't a horrible element. But still . . . almost-murder. And she forgives him VERY quickly. By the end, the woman from the city who seduced the husband is the only one really regarded as a villain, but to me this feels incredibly dated. He's the one who made vows. He's the one who was actually going to kill someone. Pushing all of the guilt onto the "seductress" feels a bit too easy, and seems to relieve the husband of his guilt in the name of a happy ending.

A really charming film, and yet another movie on the list of movies I should have checked out years ago.