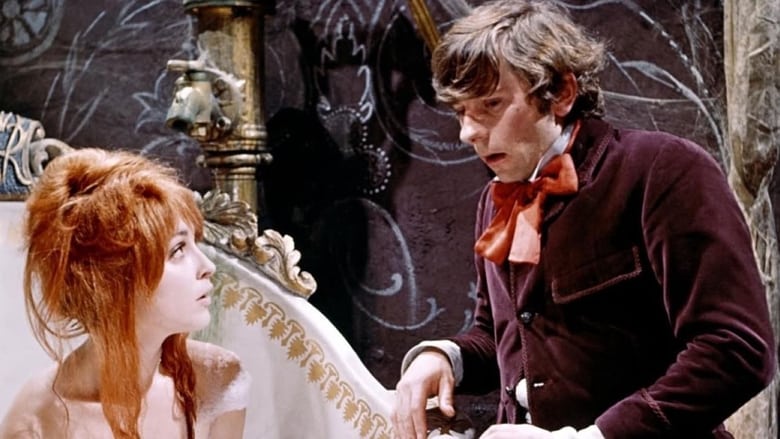 An old professor and his cowardly assistant arrive at a remote village in snowy mountains in search of vampires. This movie chronicles what happens after they arrive at this village.

This movie was intended by polanski as a spoof of sorts on vampire genre. But whatever the intentions this is a bloody good movie. The first thing you notice is the atmosphere. The movie uses a combination of paintings and real locations to create the effect that the village is very isolated and it's deep in snowy mountains. Anywhere you look its snow. The vampire aspect is very detailed and its tangible as you can see how it works. The characters are comedic but the situations are not. So the first thing you notice is, we dont really care about the village. We only care about the lodging/hotel the professor stays at. We never see the village. The hotel is just like any other remote village hotel in these kinds of movies but its cozy. Its a house turned into a hotel.

When they arrive, professor notices that the villagers are taking precautions against vampires but we quickly realize not much is known about them and all the precautions are just beliefs and none of them are tried and tested. So you see usual stuff like garlic and crosses. Professor seem to have some legitimate knowledge about vampires and he suggests that vampires don't cast shadows or reflections. Noone in the village discloses anything about vampires to professor and his assistant. But soon they notice that an ugly hunchback who works for a count visits the hotel for supplies and leaves. Professor deduce that this count could be a vampire. The hotel owner has a daughter played by sharon tate who recently moved back with them after school. Her parent protect her from outsiders by rarely letting her out. But one day the hunchback notices her from the window. At this stage the investigation of the professor and his assistant in its nascent stage. So they think don't much about it. But one night when the count aka vampire abducts the daughter, the professor and his assistant decide to go to his castle and investigate secretly.

This would be the last time we see the hotel as from here on the rest of the movie is in the castle. There is something about the initial look and feel of the castle. Because you see images that are very interesting. You see snowy mountains and outsides of the castle on a moonlit night. So its still dark but barely visible due to moonlight and its snowy. So creates this weird feeling when watching the movie. Moreover they are secretly entering the castle through any open holes or gates in the walls of the castle. It looks like a very old abandoned castle occupied by vampires.

Their arrival doesn't really stay secret for long as they are found by the hunchback, they act as though they are just passing by and the count treats them as guests. So the situation in the castle is an old vampire that is trying to increase vampire population all while keeping their existence a secret. You see lots of graves in the castle with vampires sleeping inside them. You see people not quite comfortable with their miserable existence but nonetheless they accept it. Their main goal at that point seems to be to turn younger women into vampires for the pleasure of other vampires. So when hunchback notices any such women he tell that to count and they make a trip at night to abduct.

What we also notice is that the professor is more of a history professor and through his research he gathers information based on folklore, legends, tell tales about vampires. So this is the first time he actually is in contact with a real vampire. The movie also implies that this castle is ground zero from vampires and there seems to be no other vampires anywhere else. After snooping around in the castle ultimately the count makes it clear to the professor that they aren't going anywhere and count's son has taken interest in professors assistant (played by roman polanski himself). They imprison them in one the towers in the castle until the ball is done and once it is over, the vampire will turn both of them into vampires. The professor manages to escape and they free sharon tate and rides out of the castle as it approaches day time. But unbeknownst them sharon tate is already bitten and she turns into a vampire and bites professor's assistant and the movie ends with the implication that the professors not only failed to kill the vampire but he is responsible for spreading vampires across the world. The movie also implies that the vampires and villages never left that area.