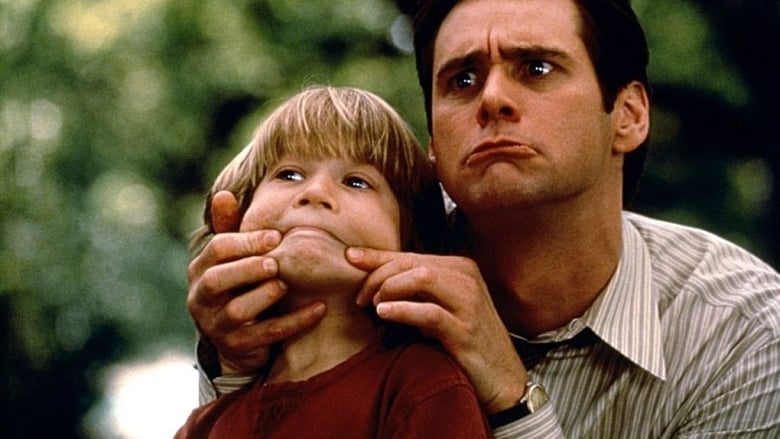 by Thief
posted on 6/21/21
in
LIAR LIAR
(1997, Shadyac)
A film with a title that starts with the letters K or L • A film with a repeated word in its title • A film about fathers

Max: "My dad, he's a liar."
Teacher: "A liar? I'm sure you don't mean a liar."
Max: "Well, he wears a suit and goes to court and talks to the judge."
Teacher: "Oh I see. You mean he's a lawyer."
Max: *shrugs*
This exchange between 5-year-old Max (Justin Cooper) and his teacher is what opens 1997's Liar Liar; which is a hilariously ironic coincidence, not only for what actually happens on the film, but also for the typical stereotypes that are attributed to lawyers which might make most people go "yeah, it figures".

The film follows Fletcher Reede (Jim Carrey), a manipulative and conniving lawyer (and Max's dad) that tends to put his career and personal interests ahead, usually at the expense of his son. But things get complicated for him when, after missing his birthday, Max wishes that his father could not tell a lie for one day.

As we all know, the wish comes true, unleashing all kinds of crazy shenanigans for Fletcher who finds himself cornered by not being able to use his usual lies and tricks to manipulate the system and get ahead. This peaks at a climatic moment in court during the first half of the film when he screams "I CAN'T LIE!!", which he does more as a desperate cry for help, rather than any moral reckoning at this point.

I've seen Liar Liar dozens of times, from theater back in 1997 to last night, and it never fails to make me laugh. Smacked down in the middle of Carrey's previous crazy comedies (Ace Ventura, Dumb and Dumber) and his more serious dramatic attempts (The Truman Show, Man on the Moon, Eternal Sunshine of the Spotless Mind), this one manages to find a perfect balance between his physical comedy and the earnest family drama at its core, and he's pitch perfect in both.

Even though the logistics of how the wish works and how it affects Fletcher in certain situations, doesn't necessarily hold up to close inspection, that is ultimately not important. Carrey pretty much carries the film and makes it work. But he's also surrounded by a solid supporting cast. Another thing I noticed this time that I might not have paid much attention before was how good is Shadyac as a director, but he does have quite a good eye for camera placement and movement.

The script does go a bit overboard in some instances, the last act feels like a stretch, and the epilogue unnecessary, but as long as you're in for some crazy Carrey comedy with charm and heart, then I can't lie, this one's perfect for you.