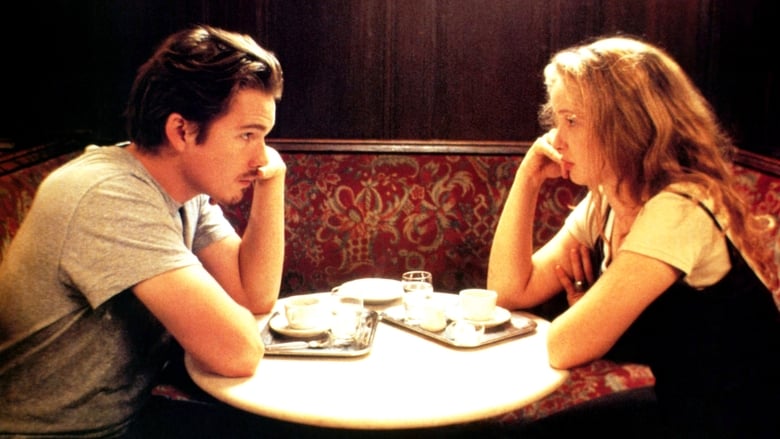 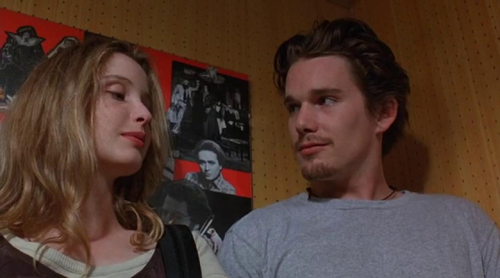 
Damn, now I got that 1980s pop song stuck in my head...Which is kind of apt, because talk, talk, talk, talk is all this insipid couple did during the movie. And there's nothing wrong with a dialogue heavy movie. I love movies where nothing much happens...but the dialogue is rich and full of life and the characters seem to be all so real...Sadly that wasn't the case here.

But what I did sense was that the director gave them a few 'deep' topics to talk about, but also allowed them to improvise their discussions. Especially in the first scenes, like on the train when they meet, neither of the actors were in tune with the other. Just one example: Ethan Hawke tells this strange story how as a boy he was spraying the hose nozzle so that the sunlight made a rainbow and then he saw his dead grandmother standing there. As soon as he was done telling his story Julie Delpy launches into her pre planned speech. She had zero reaction to his story. She wasn't in the moment. It was like she didn't even listen to him. And that not listening to each other continued throughout the entire movie. I know both actors can do better work than they did here. I blame the director's format for shooting the scenes, I'm sure most dialogue was improvised and it showed. The only time I felt anything was when they parted ways, that was done decently.