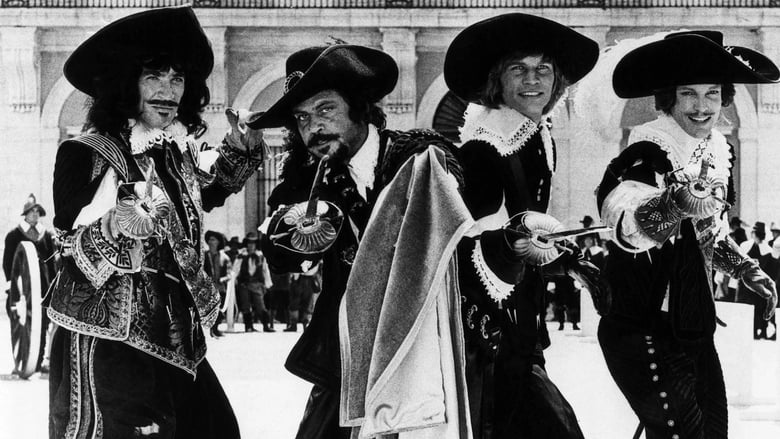 by Gideon58
posted on 8/10/20
in
The Four Musketeers
In 1973, moviegoers were treated to a sumptuous re-thinking of the Alexandre Dumas novel The Three Musketeers, featuring a brilliant all star cast and directed by Richard Lester, It was determined before the release of the film that it was too long and instead of editing the finished product, it was decided to divide it into two separate films, resulting in 1974's The Four Musketeers, sometimes referred to by its subtitle Milady's Revenge. 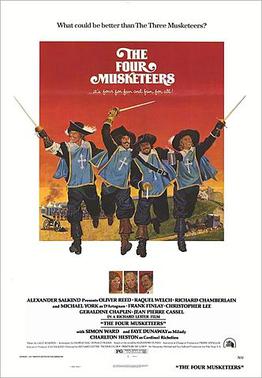 This film begins exactly where the 1973 film left off, as D'Artagnan (Michael York) is officially made a musketeer and has prevented Milady de Winter (Faye Dunaway) and Cardinal Richelieu (Charlton Heston) from their plot to destroy the Duke of Buckingham (Simon Ward) and Queen Anne of Austria (Geraldine), and has also found romance with the Queen's dressmaker, Constance (Raquel Welch). D'Artagnan enlists the aid of his fellow musketeers (Oliver Reed, Richard Chamberlain, Frank Finlay) as Milady and Richelieu resume their plan, beginning with the kidnapping of Constance and Milady providing the kind of distraction to D'Artagnan that only she can.

Since it was originally part of the 1973 film, director Richard Lester and screenwriter George McDonald Fraser assume that the viewer has watched the first film and offers virtually nothing in terms of rehashing the events of the first film. They do efficiently establish where we are in the story through the multitude of players on this cinematic chessboard. One thing that made the first film so successful was the tongue in cheek approach that Lester took with the story, keeping the characters and what thy go through flawed and funny. A darker tone is utilized in this part of the story, but the characters remain deliciously flawed. Though the events of the first film are not rehashed, there is backstory revealed between Milady and one of the musketeers that is seamlessly woven into the story and remains pertinent throughout.

This film is a lot more than just swordplay. If the truth be told, there is a lot less swordplay here than in the first swashbuckler. This is a complicated tale of loyalty and politics, that is rife with a sexual tension unlike anything ever seen in similar films. The director and screenwriter makes no bones about the fact that a lot of this story has to do with lust and sexual debauchery and how no one in the story is above using their sexuality to get what they want. It's not overt or obscene, but it quietly simmers at the core of every scene involving Lady de Winter.

Don't get me wrong...this film does provide spectacular swordplay, impeccably staged by fight director William Hobbs. I was especially impressed by the fight on ice which I didn't see coming and the final showdown between D'Artagnan and Rochefort (Christopher Lee) literally had me holding my breath.

The cast is splendid, with standout work from Michael York, just as sexy and charismatic as he was in the first film, Oliver Reed as Athos, Lee as Rochefort, Frank Finlay as Porthos, and an icy performance from Faye Dunaway that makes her Joan Crawford look like Carol Brady. Big shout outs to cinematography, art direction/set direction and costumes as well. I also loved the final delicious touch of Lester's where, instead of rehashing the events of the first film, he provided a brief look at the first film which might effectively motivate viewers who didn't see the first film to check it out.
» More about The Four Musketeers
» More reviews of The Four Musketeers
» More reviews by Gideon58