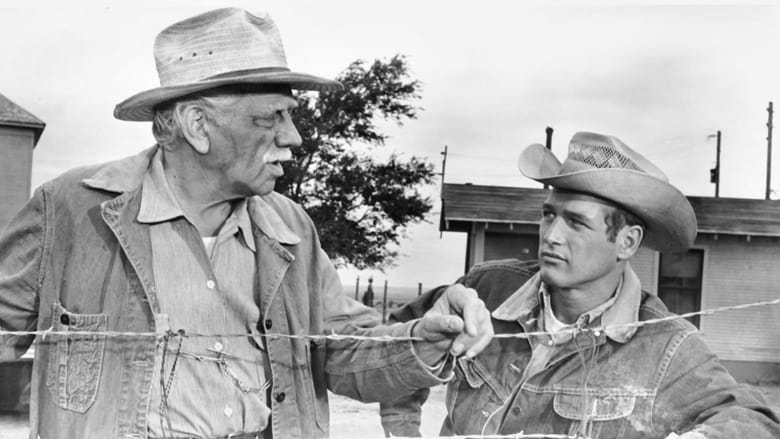 
I first watched this shortly before the Western Countdown deadline, then again a couple weeks ago. Bumped up my rating by half a star. Excellent character-driven film about generational conflict that is elevated by three great performances (Paul Newman, Melvyn Douglas, Patricia Neal) and award-winning black-and-white cinematography that evocatively captures the sparseness of Texas cattle country. The movie shares a lot of similarities with The Last Picture Show, which is fitting given that both are based on books by Larry McMurtry, one of my favorite writers. The dialogue possesses a down-home poetry. (Simple example, instead of "want to grab a drink?" it's "want to blow some foam off some beer?" And many of Hud's lines read like a cynical quote of the day: "You don't look out for yourself, the only helping hand you'll get is when they lower the box.") Storytelling is economical. Characterization is effortless.

Within the first few scenes -- a bar owner sweeping broken glass ("Hud was in here last night."), Hud nonchalantly exiting the house of another man's wife and allowing his nephew to take the blame when the husband demands an explanation, Hud recklessly destroying the housekeeper's azaleas with his shoddy parking -- we know all we need to about Hud's character. It speaks to Newman's magnetic charm that the eponymous character remains likable -- at least up to a certain point -- despite his selfish actions and contemptible manner. I'm one of the many who find the kid in Shane insufferable, so it was a shock to discover that Lonnie, Hud's impressionable teenage nephew, is performed with such naturalism by the same actor all grown up. Almost as surprising is Melvyn Douglas, whom I primarily think of as the debonair charmer in Ninotchka, as a convincingly gruff, rugged, worn-down cattleman. Patricia Neal's housekeeper is the glue. Her one-on-one scenes with Newman are electric. I only wish she'd had more screen time. Each character is multi-dimensional. A small cast of genuine articles.

I appreciated the absence of flashbacks and exposition, with the script instead delivering the backstory piecemeal through snippets of dialogue, though certain key details of the family's history remain elusive and make me want to seek out the novel. Primary themes are nakedly discussed, with seemingly every conversation between father and son revolving around principles, along with the symbolism of sick cattle that must be put down to prevent the spread of disease. There's also a coming-of-age element with Lonnie caught between a constant tug-of-war between his primary influences --- the heavily principled, but stubborn grandfather, whose word means everything but fails to adapt to the changing times and the cool, ambitious, unscrupulous uncle, who is more suited to survive financially, even if it means cruelly bulldozing everyone around him --- as Lonnie must decide to either forge his own path in life or follow in the footsteps of others. As a character, Hud is extremely flawed. As a film, Hud is nearly flawless.