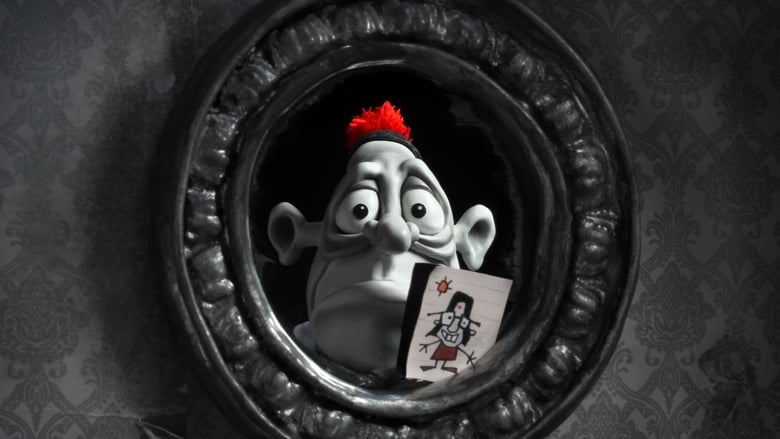 If there's one good reason for my doing this entire tournament, it's probably the fact that I discovered so many good new films, and easily the best movie I discovered was Mary and Max. It's actually shocking that this movie placed in the countdown in the first place, or was even released to American audiences. It's an Australian adult stop-motion independent film. It's in black and white, except for some sparse scenes of color. The plot is slow moving, and it's overall a dark film that doesn't really make you feel very good.

And I love it! I've now seen it three times in only a couple months, and I'm loving it more and more each time. It's one of the most unique films I've ever seen, and watching this movie, it just reminds me how good of a year 2009 was for animation. We got three incredible entirely original flicks (Up, Fantastic Mr. Fox, and Mary and Max) plus solid films like Coraline and Ponyo as well. But Mary and Max didn't even get nominated for Best Animated Picture. I don't think it should have won (Fantastic Mr. Fox is better) but it should have gotten a nomination.

However, as I said, I'm shocked it's even kind of well-known at all. But I'm happy that it is, because I watched it and, as I said, I loved it. There are essentially only two characters in this entire film. Can you guess who they are? Tough one. Anyways, I think the movie spans maybe 10-15 years through the lives of Mary (a young girl who lives in Australia) and Max (an obsese atheist with Asperger's who lives in New York). I can honestly say both these characters are so real and touching, they are so lovable yet have clear flaws. Watching them grow and learn during the movie is amazing.

Mary and Max isn't afraid to push boundaries about animation. For one, there are zero elements of fantasy. Nada. I mean, the characters have thoughts and stuff, and the visuals are shown, but there's nothing in the plot that couldn't actually happen. In fact, the movie claims its based off of a true story (I read later that it is the director's own personal experiences with a pen pal). Another thing Mary and Max does is include characters who aren't likely for any movie, much less animation. Take Max. He used to be Jewish, now he's Atheist. His mom killed herself and his Dad ran off with some chick. He's obese. And we learn about halfway through that he has Asperger's Syndrome. Just his short description is so incredibly detailed, you come out of this movie thinking that Adam Elliot must have just put so much work into the characters and the story.

I don't generally like narration in this film. It can get boring and old, and can be overused for emotional manipulation. Well, Mary and Max is like 99% narration. It's either the omniscient narrator, or Mary and Max talking about their lives. The rest of the movie includes short remarks by the characters during daily lives. And for this movie, it works perfectly! The letters they write never feel forced, they feel authentic, and I was actually beginning to wonder if these were actual letters originally used in the "true story" mentioned earlier. Needless to say, fantastic writing.

The quirky soundtrack is golden. There's a fun mixture of classics like Prokofiev's Romeo and Juliet and Handel's Zadok the Priest, and tunes like Que Sera and some Frank Sinatra song (forgot lol). The music in between and at the end is very powerful as well. I basically loved all the music choices in this movie (pus the typewriter song!! Loved that).

The animation is totally cool. Most of it is in a dark black and white. There are sometimes reds, or other colors, but really, this is a black and white film. It adds to the overall mood and tone, and you're left somewhere between depressed as f*** and nostalgic for some long forgotten past. The animation is also oddly realistic looking. I know it's weird to say for crudely shaped figures out of clay, but these people feel like actual humans I could meet. I don't know why I feel that way lmao.

If you couldn't tell by this review, I love Mary and Max. Only reason I wouldn't give it a or higher is just because I don't know how many times I can watch it. It's just a bit too depressing, and I think three's good for a couple of years at least now. That's not to say I don't recommend it. EVERYONE needs to watch this film at least once. Seriously, I think it's that important. It certainly won't be everyone's cup of tea, but for some of you this must just turn into an eternal favorite as it has for me.