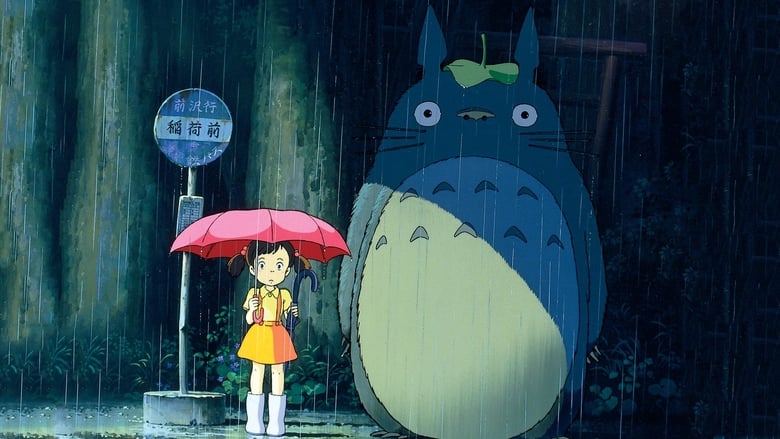 From the same director as epic films like Nausicaa of the Valley of the Wind and Princess Mononoke, comes movies like Kiki's Delivery Service and My Neighbor Totoro. My Neighbor Totoro is my sixth favorite Miyazaki, but I still love it. Everything about it is just wonderful, and it's like taking a refreshing breath of air on a summer or spring day. It's an ode to warmth and happiness that I find is very hard to dislike. Kudos to this movie for just being different.

So what is this movie about exactly? This is one of those rare slice of life animated films. Some others I can think of are The Incredibles (kind of) and Persepolis (kind of). But My Neighbor Totoro is a true "story-in-the-background" film. The first time I saw it, I was just really confused by its lack of a real story arch and structure. This is because it is so different from most films made in the United States in terms of plot. Many Western films rely on a rise-and-fall narrative involving a single protagonist with a conflict or goal that he or she must overcome. This is not what My Neighbor Totoro is at all. There is no one protagonist, but rather several important characters. There is no overarching conflict, although there are mini-conflicts along the way (notably the fact that Mei and Satsuki's mother is in the hospital). For the most part, there are simple anecdotes of daily life for the girls. Of course, these anecdotes are incredibly entertaining and make for one of the better animated movies out there.

Of course one can't talk about My Neighbor Totoro without mentioning Totoro himself. He's none other than the Studio Ghibli mascot, routinely ranked as one of the best animated movie characters of all time, and is is simply an icon. How can one not love such a creature? The totoro is a giant wood spirit that joins the young girls of the film on many of their adventures, and in the end, saves the day. He is a curious, goofy, yet noble beast that really represents the imagination and heart of childhood. And don't forget his Cat Bus as well, another magnificent Miyazki-ism. The sheer amount of magic and delight in this film is hard to measure. It truly is a film for all ages, as well. As a youngster, the joyous excursions of the two young girls with Totoro are a delight. As you grow older, you'll see more mature themes involving the environment and acceptance of tragedy. In the end, its a heartfelt film.

It's also beautiful looking! I mean, I can't say there's a Miyazaki film that's not beautiful looking, and My Neighbor Totoro is no exception. There are beautiful Summer Day colors and palettes, and it's overall a feast for the eyes. The music is fantastic and often gets stuck in my head. There's also a quiet melancholy to it that always makes me nostalgic... for what, I don't know. This movie brings a lot of childhood emotions to me in ways that I don't quite understand. It was never a childhood favorite, I only discovered it a couple years back. But it still gives me that bittersweet look back into the past, back when things were happier, simpler, and less complex. Truly beautiful film.