by Gideon58
posted on 8/05/18
in
Mulholland Drive
David Lynch, the creative force behind Blue Velvet, Wild at Heart, and the TV series Twin Peaks takes us on another bizarre journey with 2001's Mulholland Drive,a noir-ish picture puzzle of a movie whose parts take just a bit too long to become a whole. 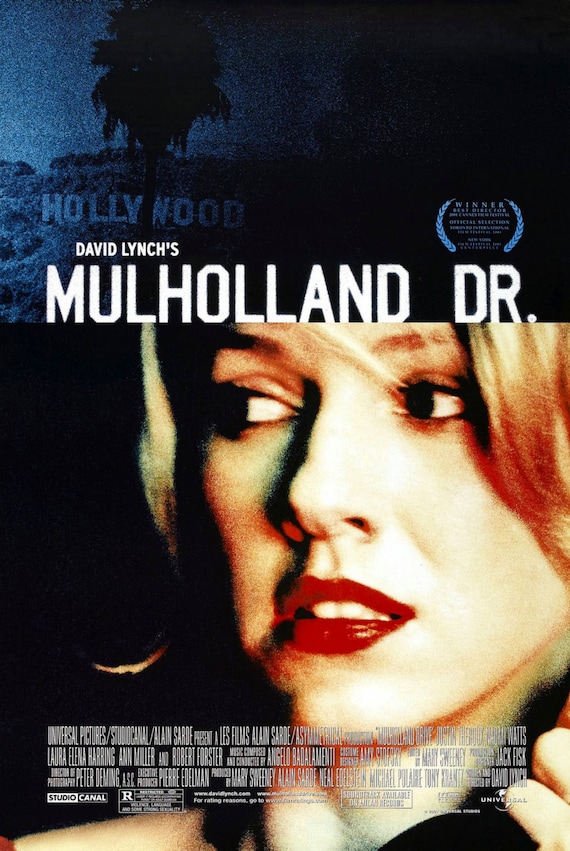 The primary story elements here include a woman who has been in a car accident and doesn't remember who she is, an aspiring actress named Betty who has come to stay at her Aunt's apartment; a mysterious blue box, a purse full of money, and a film director named Adam who is being pressured to cast a particular actress in his latest film.

Another entry from the "And then I woke up" school of filmmaking, Lynch has crafted a story so bizarre, rich with eerie symbolism and red herrings that there is no possible way that what we are watching can be completely steeped in realism, but this isn't exactly foreign territory for Lynch so fans of the director will be right at home here, though even Lynch purists might find their patience tested here a bit. Lynch has a stylish directorial eye that comes through in every frame of this film...the director employs all kinds of cinematic trickery in order to tell a story that the viewer can not only follow, but also demands complete attention from the viewer, even though said attention isn't completely awarded. There are a couple of things that happen here that were never explained to my satisfaction. but it's David Lynch and if you dwell too much on little things you miss the big picture. The appeal of the big picture came from the relationship that developed between Betty and this amnesiac beauty who called herself Rita after seeing a poster of the movie Gilda. These characters are truly polar opposites...when we see Betty getting off the plane, she practically has corn cobs coming out of her ears and our first glimpse of Rita also indicates that this is a girl who has been around the block and even though she's forgotten who she is, she still senses a danger courtesy of the life she's forgotten. I loved that as Betty and Rita try to piece Rita's life back together, Betty became more and more intrigued, Rita became more terrified and just wanted to let sleeping dogs lie.

Lynch's attention to production values is to be applauded with special attention to art direction/set direction, editing, and sound. He has also assembled a solid cast to tell this story...Naomi Watts makes Betty's transition from naive country girl to amateur sleuth very believable and Justin Theroux was terrific as Adam. It was also lovely seeing former MGM musical icon Ann Miller, in her final film role, as Betty's landaldy. But the real star here was the breathtaking Laura Harring whose steamy Rita conjured up images of Marilyn, Jean Harlow, and, yes, Rita Hayworth. Harring is riveting and enchanting and puts you behind this lost soul she portrays from the start. It goes on a little too long, but Lynch hit a real bullseye here, a loving homage to the film noir with a contemporary seasoning.
ģ More about Mulholland Drive
ģ More reviews of Mulholland Drive
ģ More reviews by Gideon58