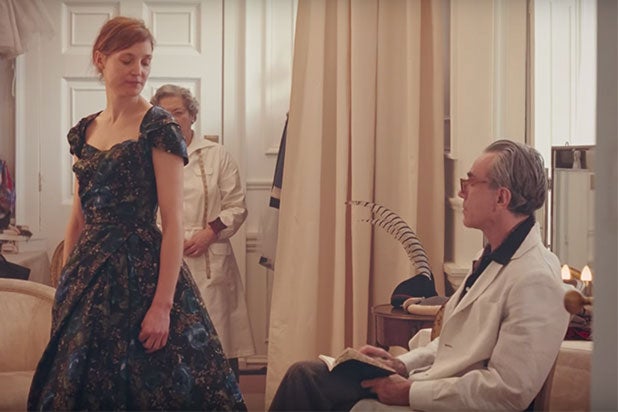 We all know just how leery I am of PTA. The first films of his I saw were The Master and Punch Drunk Love and I absolutely despised both of them. I saw Magnolia and thought it was ok. Then I saw There Will Be Blood and I thought it was an outlier of his work, as I actually thought it was really well done.

Sean told me last night to see Phantom Thread, and that he wouldn't hold it against me if I didn't like it. Swan also warned on his page if you don't like his other films, chances are you won't like this one. And here I am to buck that trend.

It gets off to a slow start certainly but it's interesting to meet Woodcock, Alma, and Cyril. We see how obsessed Woodcock is with his work and it begins to translate with how he feels about Alma, whom he met as she waited on him and he then asks her out on a date that would forever change his life. His obsessiveness of life became even stronger, roping her into his world without really changing anything else about it.

I was a pretty big fan of the score, the camerawork, and the cinematography. I especially like the very small scenes where we saw Woodcock and Alma driving in the car, those were excellently executed albeit short scenes. The atmosphere created in the film gave the film a setup for a lot of tension in the second half of the film.

The acting was just as good as advertised. Daniel Day Lewis was magnificent. If this was indeed his last role he is surely going out with a bang. But I was stunned that an actress I've never heard of, Vicky Krieps, went scene by scene with Day Lewis and was equally as impressive. The relationship and the bond that the two have creates a very interesting bond between the two. I couldn't help but compare parts of the film to the obsession theme that Hitchcock used in Vertigo. People may think I'm strange but it felt sort of like the James Stewart/Kim Novak type of relationship. Then throw in Manville who I wasn't a big fan of in the first half but came on strong in the second half and you have quite the trio.

That second half was insane, honestly some of the best filmmaking of this decade. Yup, I can't believe I said it. I was completely shocked when Alma was looking at the poisonous mushroom papers. I was even more shocked near the end that he was so obsessed with her that he was willing to let her beat him down so she could take care of him.

If it weren't for a slow moving first half, it might be even more of a big hit for me. But crazy to think about 40 minutes in I was thinking to myself here we go again and then as the end credits roll being wowed, it's one of those cinematic experiences that is tough to explain. I've never felt that way in a theater before. Not to mention I was the only one in there, so that made it even more awesome.