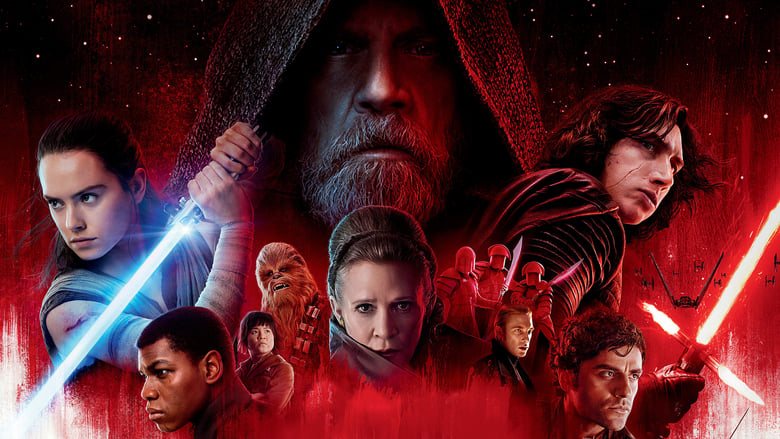 This is a movie that can be reviewed in one of two ways; either as a loud, bombastic blockbuster suitable for the whole family, or from the perspective of a dedicated Star Wars fan. I am not the latter, although I have enjoyed previous entries in the series and hold The Empire Strikes Back as one of my favourite ever films. However, I can understand frustrations from some long time fans, as much of what they old dear...heck, even sacred, is wiped away and laughed off. This is not the best way to handle a rabid fan base. Then again, Disney understands Star Wars no longer needs that small group of hardcore supporters. The franchise is not a nerdy niche, it is vast, all consuming even. Every one will watch this now. It is a mass market product that can do away and even laugh at its nerdier, more mythical pass.

None of that means it is a bad movie and viewed as blockbuster fun for the whole family, it is possibly the best of the year. Deeper and more creative than Thor, nowhere near as dour and ugly as Justice League. The opening sequence may be one of the best ever in the series, a fine space battle which also helps set up the rest of the story and a new character. The visual effects are also some of the best on show, with a handful of practical effects combined with exceptional CGI, which never feels intrusive or inorganic. For the first time in a while, we get to see new creatures, vehicles and locations on screen, with the Porg's both cute and annoying but it's the Chrystal Critters that are most startling. Beautifully realised and surprisingly important to the plot.

The plot, sadly this is where the film seems to buckle under its own ambition and rams home too many political points. Some are well realised, in particular a beautifully constructed section on a casino based planet. Monte Carlo eat your heart out. It is Johnson's stab at dissecting capitalism and telling us why rampant materialism can be so divisive and abusive to society. Other sections are not so well handled, ideas thrown out there and then forgotten. The central plots with Rey and Finn suffer from a combination of convolution and nonsense. Finn is barely even a character here and it takes Boyega's charm to even make him watchable. Rey on the other hand has everything to do, whizzing across three different worlds, training, fighting, saving every one. Even Luke was not this busy across three films. The effect of this is that Rey loses any coherence as a character.

The new additions, namely Rose (Kelly Tran) and Vice Admiral Holdo (Laura Dern) are hit and miss. Rose starts off as a lowly mechanic style character, mourning the loss of her sister in the opening sequence and ends up being at the forefront of the rebellion, able to fly craft and do battle. How'd that happen? How long has passed for her to learn those skills? Oh and when did her "love" for Finn develop? When they were bickering or when she thought he was a deserter?

Holdo only fairs slightly better and that too because of the mystery surrounding her motives. It is a surprisingly well constructed sequence of events but one that ultimately makes Poe Dameron (clearly being groomed to be the most likeable member of the cast with a role as rebel leader) look a complete fool. How can a man like that ever lead? Then again, plots have not been the barometer of blockbuster success. Ultimately it is a movie that made me laugh and smile almost all the way throughout. There were genuine applause moments, from the destruction of the dreadnought to THAT death. Luke showing off his powers was also fun and an inkling of what the Jedi are capable of.

A word on Carrie Fisher then. She is sombre mood throughout and seems to have entirely lost her aristocratic accent. Are we watching Princess Leia or Carrie Fisher? Does it matter? Maybe not, as the movie is a sweet send off for the character, not from the franchise but from the forefront of the saga. The last of the original trilogy but now willing to pass her torch onto the next generation. Her scenes carry the most weight and her arc, although small, is the best of the group.

So all in all, if someone wants a good time at the cinema, which is visually arresting and inventive in its use of light and sound, then I'd say go for it. It is a fun time and well worth a well priced ticket. For die hard fans, if you haven't seen the movie yet, know that you are in for a kicking of your childhood. Nothing will be sacred.